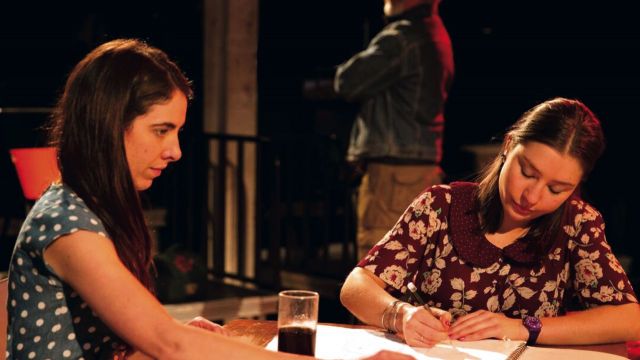 The Long Red Road is a play that sneaks up on you and finally grabs you by the throat.  At first, you don’t know what the hell is going on.  Somewhere in Kansas, a bitter mushroom farmer, Bob (Lee Mason), worn down and soured by duty, has a fractious relationship with Sandra (Marissa O’Reilly), a woman crippled in both her legs.  Her defiant daughter, Tasha (Angelica Angwin) tells Bob she hates him.  Seven hundred miles away, on or near a Lakota tribe reservation, self-destructive alcoholic Sam (Mark Diaco) drinks himself into oblivion in a bar run by Clifton (Red Horse), a taciturn Lakota chief, and lives with absurdly patient, loving and hopeful school teacher, Annie (Liza Meagher).

The scenes in both locations are short, crisp and employ cinematic juxtapositions.  No one is happy, except maybe Annie and she’s whistling in the dark.  It’s the most pessimistic Americana and the sense of unrelieved misery goes on perhaps too long.  It’s not until two thirds of the way through Act One that things click into place with a revelation – or the confirmation of a growing suspicion.  I’ll say no more about the story because this is a play with a story and its developments and revelations keep coming.  That’s how it gets you. All five cast are excellent – although Lee Mason’s mid-West (?) accent lost me occasionally.  All the same, his portrait of a good man simmering with anger, nursing resentments all his life, a man who wants to leave, but won’t  - or can’t – is moving and then frightening when the anger erupts.  Marissa O’Reilly’s role is small, but she is powerful: as she sits hunched in her wheelchair, she exudes all the ambivalence of a woman who still loves the man who crippled her.  Liza Meagher gives her Annie a kind of vulnerable sweetness from her very first line.  We know she’s going to be hurt and will go on being hurt and we wish we could protect her.  A tiny scene in which we see her teaching her school class – many of them Lakota kids – and trying to put a sugary gloss on their people’s history tells us much about her.

Angelica Angwin is a thoroughly convincing teen – a mix of smarts and poignant naiveté.  In the second Act, it is her scenes with Mark Diaco that get you by the throat.  Mr Diaco’s Sam, a war veteran asking for trouble – and he gets it: he wants to be punished – should get tiresome, but he doesn’t.  This is a fabulous performance in which you simply have to feel for a character in such pain.  Red Horse’s role is also small but important and he brings a quiet dignity to it.  He’s Sam’s confidant and tries to be his mentor.  It is from him that Sam learns of the ‘long red road’ – the Sioux term for ‘the journey towards redemption and inner peace’ – according to the programme notes. If I have reservations about this production, the first might be that the Native American connection is laid on rather thick and its substance (title aside) rather thin.  Sam, after all, could drink himself to death anywhere and his confidant could be any patient barman.  It seems to me that Brett C Leonard tries to give his story – essentially a family drama – another layer, but it doesn’t quite convince, despite Red Horse’s haunting flute music at the play’s end.

Second, director David Myles has made some curious choices in his use of the fortyfivedownstairs space.  He puts the audience either side of the playing space with the result that some important action is simply masked from one side or the other and some of Lucas Silva-Myles lights (otherwise subtle and skilfully directing our attention) light up the audience instead of the players.  Then the shifts from Kansas to Lakota territory mean the audience turning from one end of the playing area to the other and back again, often leaving the actors in one or the other space having to get off without distracting the audience from the next scene.  But no one can doubt that Mr Myles has elicited fabulous performances from his wonderful cast and it is they who make this sad tale live.