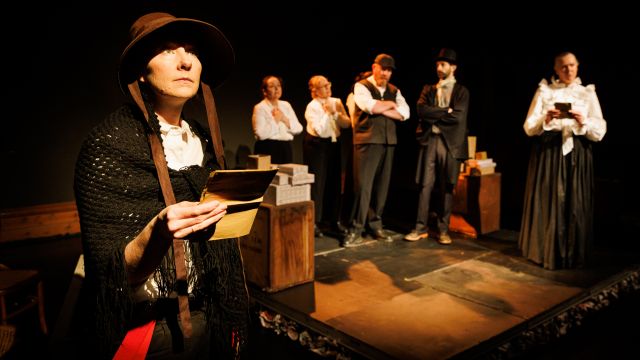 Louisa Lawson was a formidable woman who came from Gulgong near Mudgee – and then from a hut on the goldfields.  She came to Sydney in 1882, a widowed single mother of four children, into a hostile, patriarchal environment.  She was a fearless, possibly bullying, indomitable feminist, suffragette, poet, author, and publisher and editor of The Dawn, a monthly newspaper produced entirely by women.  She should certainly be known as rather more than merely Henry Lawson’s mother.

No doubt playwright James Howard’s intention is to extol Louisa’s achievements and remind audiences of her place in Australia’s history.  Here he chooses to locate her story when The Dawn is up and running, with her all-woman team operating the presses and bringing articles to Louisa (Gin O’Brien) for approval.  Work is constantly interrupted by Louisa’s opponents and enemies: the Typesetters’ Union who object to women printing – at all; the editor/owner of a rival newspaper; anti-suffrage blusterers; and so on.  In these more or less humorous arguments, Louisa does not counter their arguments; she simply denies antithetical opinion and dispatches these men with good-humoured ease.  As a result, the fierce and nasty opposition historical Louisa encountered is diminished - as is any sense of drama. Howard’s construction of his play is pretty much the cut-and-paste-plus-Narrator method used rather too often with historical research to dramatize the life of an historical figure.  The assumption seems to be that merely quoting our hero or heroine will convince a contemporary audience of their relevance, importance, brilliance, courage, and forward thinking.

Director Ann Chadwick has her cast play multiple characters (real and generic) including commentary from a ‘Greek Chorus’.  There are songs (live music comes from Adam Menegazzo on violin and Kate Parkins on piano), but nearly all the dialogue is based on the writings of the time – by Louisa herself, by her opponents and the occasional supporter, such as William Lane.  The result is a cast, in whom we see glimpses of talent, hobbled by the playwright’s choices.  There is a stilted and unnatural feel to everyone’s speech – and there are no characters, just mouthpieces.  There is a loyal daughter Gertrude (Tayla Harry), but no other of Louisa’s children, not even Henry who actually worked at and wrote for The Dawn when not looking after the children if his mother was elsewhere.  He gets a passing reference. There is certainly a play to be had based on the life of Louisa Lawson, but this isn’t it.  This is agit-prop in which all material and emotional obstacles seem to be in the past,  and obviously wrong and buffoonish opposition is vanquished via Louisa’s superior, smiling common sense.  No strain, no anger, no ruthlessness, no sacrifice.  As Flaubert said, ‘you can’t make good art from good intentions.’