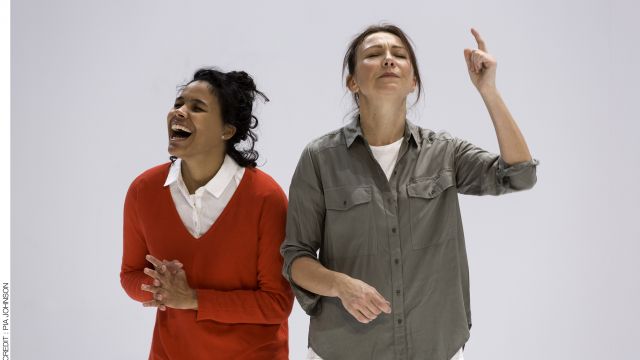 Two extraordinary films which defined the emergence of a brave new mechanical world were Fritz Lang's Metropolis and Charlie Chaplin's Modern Times. These silent films depicted a society in which man became subservient to the mighty machine and language became redundant noise. The dominant visual images were clockwork and hydrolic in a world that slid by on grease. Like the vast set of Love and Information which consists of dozens of coffin-like boxes which the eight actors smoothly and constantly rearrange like the meaningless soundbites they seamlessly regurgitate. The world of the scores of characters in the seventy scenes of Love and Information is like a game of scrabble where the words are rearranged as easily as the wooden blocks that slide endlessly across the playing board of life. Churchill would seem to be saying that information is overloading humanity to the point where the simple emotion of love may no longer be possible. This is an interesting point of view and well worth considering, as we do here. The visual imagery of the constant shape shifting on stage is fascinating and the slices of conversations delivered are intreging. We are reminded of the constant motion and shallowness of modern times and our fading humanity. The stagecraft of Love and Information is truely beautiful and the acting is faultless. But at the core of their stories Lang and Chaplin offered us hope that humanity may prevail by developing characters who may overcome the tsunami of commerce and information that is flooding our minds and hearts and blocking out the possibilities of love. As beautifully presented as it is, Churchill's nearly two hours without a story or the development of characters becomes a bleak abstraction of modern times. There is no hope at the heart of this dark matrix of information and shape shifting.