Love Me Tender by Tom Holloway 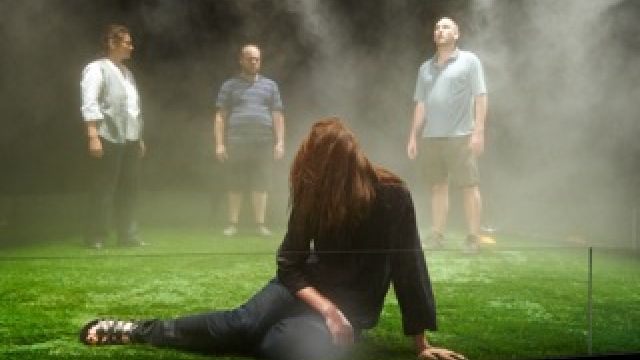 Bold, engaging and at times verbally graphic, this work by writer Tom Holloway and director Matthew Lutton discusses the human elements of love, parent-child relationships, fears and sacrifice. Inspired by Euripides’ Iphigenia in Aulis this play follows a mother/wife, father/fireman, policeman and two human narrative agents. The main characters explore their inner thoughts about domesticity, relationships, gender roles and animalistic intentions.
The set is minimal; an elevated grassed area with a Perspex barrier reminiscent of an ‘Aussie’ backyard but could also be likened to some sort of ‘animal pen’. The freshness of the green grass, watered by a sprinkler, provides for a light offset to the intensity of the play. Animalistic desires and intentions are a theme explored through metaphors, dialogue and action.
Although thoroughly gripping and challenging, at times this play lacks the subtlety that would have delivered its purposeful subtext more effectively. There are segments of unnecessary over-the-top display, including a writhing, gyrating dance from the Mother (Belinda McClory) to a Britney Spears' song. Preceding this dance the character verbalizes her disgust and anxiety about the objectification and over-sexualisation of pre-teen girls. The writing alerted us to the concerns of the character but the dance lost the sophistication of the scene.
It’s obvious the five actors, Luke Hewitt, Belinda McClory, Kris McQuade, Arky Michael and Colin Moody are experienced, consummate theatre practitioners. Arky Michael is particularly engaging. He plays one of a duo who are almost like an internal dialogue within the narrative itself. The duo jump and dart around, they play and wrestle with words, they stutter and spit out thoughts to intensify the scene, they nudge and question the characters in the scene. Michael brings an enthusiastic, theatricality to the play that enlivens and lifts its energy, that could otherwise fall victim to a ram-raid of heavy issues.
Towards the end of the play a live little lamb is carried onstage. This is the beauty of live theatre - that delightful reminder, that anything-could-happen moment. Michael delves into an explanation to the father, Colin Moody, of how to kill the lamb; how to sacrifice the animal. At the precise moment of explaining how to cut the throat in a certain way the little lamb bleats - perfect timing - however some may argue the lamb could possibly be distracting to the audience, pulling us out of the incredibly entrancing narrative and back into reality. At the very end Moody comes out with blood on his hands and T-shirt - again I felt this was too obvious and lacked subtlety.
This play is anything but boring; almost the opposite, it could leave one worn out. The wrenching moral dilemma the father is placed in, set within the real life horror and drama of the Victorian bushfires, hits us where it hurts. This play raises many important issues, from community and family loyalty, relationships to sacrifice, sexuality and fear. Thought provoking, challenging, and visually interesting, with superb direction from Lutton, this play may leave you discussing the themes of the narrative for hours after you’ve seen it.
Emma Bell