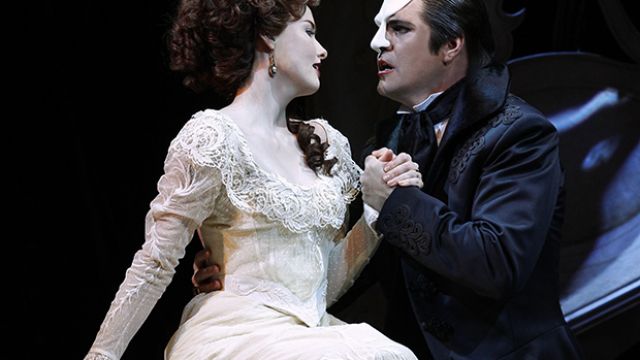 Andrew Lloyd Webber’s Love Never Dies has had a chequered history. Its London opening was marred by “phans” ,who picketed the theatre because they didn’t believe there should be a sequel to The Phantom Of The Opera. The reviews were mixed but mostly downbeat and the show was nicknamed “Paint Never Dries”, an appellation that stuck.

During the London run they closed the production to implement new script changes. They didn’t help.

The Australian production opened at the Regent Theatre, Melbourne, 28 May 2011, with a new creative team, new set and costume design, new choreography, and more changes to the script. The physical production was lauded, as was the cast, but the show, or at least the story, was not reviewed favorably. The Sydney production again made changes and this version, the fourth, played a North American tour in 2017-18. Again the reviews were negative.

But from the beginning Lloyd Webber’s score was acclaimed (and unchanged) and that’s what resonates and lifts the show to a higher plane when watching this video version filmed at Melbourne’s historic Regent Theatre.

It is ten years after the original story and The Phantom has decamped to New York’s Coney Island, where he lives amongst the side-shows and freaks. Christine has married Raoul and in the interim has given birth to Gustave. What Raoul doesn’t know is that he is not the father of the boy but the Phantom is. It’s hokey but no more so than plenty of other melodramatic plots.

Ben Lewis is marvelously brooding and mesmerizing as the Phantom and Lloyd Webber has given him a stunning ballad to sing, “’Til I hear You Sing Once More”, a song worthy of the great British melodist Ivor Novello. Anna O’Byrne is a regal, liltingly-lovely Christine and she also has been given a showstopper by Lloyd Webber, the title song. Originally written for 2000s “The Beautiful Game” where it was titled “Our Kind Of Love”, its new incarnation “Love Never Dies” sits very comfortably in this score and O’Byrne gives a ravishing performance of it.

Simon Gleeson does well as the dissolute Raoul and is particularly strong partnering Lewis in “Devil Take The Hindmost”. Sharon Millerchip is back to play Meg Giry again (the only holdover from the original Australian Phantom production) and gets the most out of leading a “Bathing Beauty” chorus-line in Edwardian swimwear, whilst Maria Mercedes brings menace to her mother Madame Giry.

I saw the original London production with Ramin Karimloo and Sierra Boggess, and enjoyed it, and especially luxuriated in the melodic excesses of “’Til I Hear You Sing Once More” and “Love Never Dies.” I also saw the Melbourne production and have to be honest and say I preferred the original London version. In London “’Til I Hear You Sing Once More” came a third into the first act and was the perfect spot for it. In the Australian version it opened the show and with no build-up to it, it didn’t work as well. The applause was good but not thunderous.

Gabriela Tylesova’s new costumes were wondrous but her sets overwhelmed the production as they kept shuddering around the stage, and Simon Phillips’ direction was clunky, especially his staging of the final scene on the footbridge. Fortunately, Brett Sullivan’s film direction keeps it close and intimate so you don’t notice these things like you did in the theatre. Love Never Dies will not find an audience as large as The Phantom of The Opera, but it was well-worth a revisit, and great to hear those two outstanding songs again.