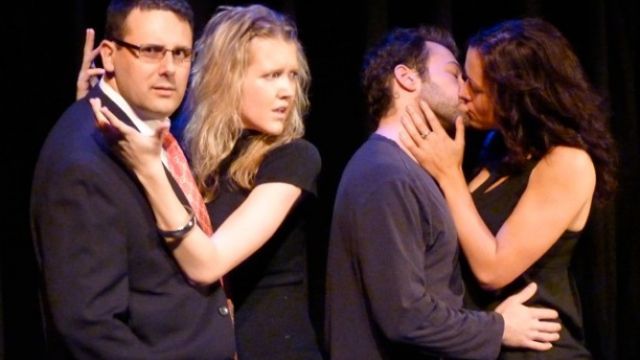 Poor Beane. He’s socially-inept, shadow-like, and in common with his family, we suspect he’s gravely mentally ill in some undetermined way. He’s living a life devoid of colour and possessions, rattling against his walls in an apartment, intimidated even by the electric lights which he feels the need to extinguish. Meanwhile, his sister Joan and her husband Harry live a life full of possessions but empty of meaning. One day, Beane arrives home to find Molly, a vibrant and intelligent burglar. He’s besotted, she’s intrigued and an unorthodox love blossoms, bringing light to the lives of Beane and his family.

Covering much the same sort of material as Lars and the Real Girl, John Kolvenbach’s script is a charming, whimsical, imaginative story with a brilliant surprise towards the middle of the second act. The utterly hilarious banter of the opening between Jenna Roberts as Joan, and Jim Adamik as her husband Harry, translates what would be a lightning fast New York delivery to the Australian accent convincingly, with mostly spot on timing. The next scene, a set piece in which Harry tries to administer a psychological test to Beane, had the audience screaming and hooting with laughter.

There are a few little niggles with the production. I hope that by the second performance, they get rid of that pendant light over Joan and Harry’s house. It constantly swings, sending huge, distracting black shadows over the wall, irritating me and my lighting designer companion. Better, or more co-ordinated, use could have been made of a sheer wall to Beane’s bathroom, which is a bit of clever set design that isn’t quite working. When Molly arrives, she delivers her lines directly to the audience, pacing up and down the stage. I can understand why director Jordan Best has made this decision – it’s to emphasise Molly’s wildness, to give her that caged big-cat quality. But this alienates Molly from the audience, making her a little unlikeable. But more than that, it means that she’s not engaging enough with Beane. She almost seems to be ignoring him. She doesn’t quite convince, and she needs to be a very real character.

After that introduction, Sophie Benassi warms into the part of Molly. The standout performance though is Tim Sekuless who is gorgeous as Beane, bringing to him the sort of naive sweet hopelessness that would have recent mothers lactating. He’s an absolute delight to watch. He, and the riotously funny script, make this production well worth seeing.