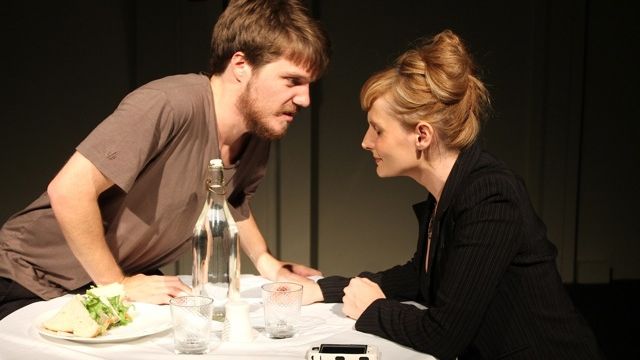 If you're feeling down there's a trick you can (supposedly) do to your mind, and that's to smile. Apparently the mere act of turning the corners of your mouth upwards and baring your teeth - while willing your face to feel pleased about something, acts as a nudge to the mood lifting chemicals in our brains and voila! We feel a bit better.

What is real and tangible on the outside and what is felt internally - and how both of those influences affect our sense of well-being and relative sanity (and the well-being of those around us) is at the core of John Kovenbach's alternately hilarious and poignant love-letter to emotional stability (or lack thereof), the highly relatable Love Song. The play has a linear storyline, but is presented in a series of scenes that could, in and of themselves be a series of short-plays; as the pace, mood, style and metaphors continually change, whilst still remaining fluidly linked to each other (nice job Kovenbach!). 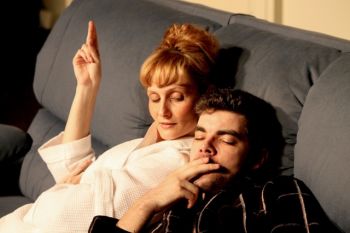 The opening scene acts as prologue and presents the first metaphor. Beane, a sad, silent loner sits in a sparsely furnished room, contemplating the effectiveness of his troublesome lamp. In the next scene we are introduced to a materially successful, married couple - Joan and Harry, whose highly amusing, rapid-fire dialogue (about her reasons for firing her personal assistant) exposes the quirks and superficiality of both their characters. Beane enters the scene - revealed to be Joan's brother and the focus shifts squarely to his emotional stability. He may be depressed and lonely, but he's seems quite relaxed about it. They, on the other hand feel exasperated. It doesn't take a psych major to absorb the irony. As fate would have it, in the next scene our sad hero meets an enigmatic burglar who seems just as messed up as he and it's here that the fifth character enters the scene, in the form of love.

The rest of the play delves cleverly into the different aspects of love, lust and insecurity as we are batted back and forth between couples, witnessing the transformation, not just of Beane's character, but also in Joan and Harry as Beane's newfound joy (and sanity) becomes the catalyst to their rediscovery of themselves. 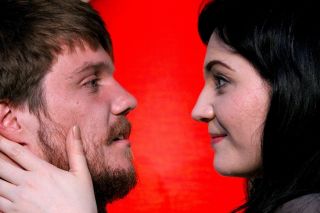 It's a juicy, poetic and challenging piece of theatre and for the most part, the highly-skilled cast do it justice. Stooged Theatre Company is slowly but surely building a reputation for presenting edgy, contemporary and updated classics of a very high quality and this production is no exception. My main gripe was with the staging. While I'm a fan of minimalist sets - especially for a densely written, actor's showcase such as this, the few bland set pieces that depicted two locations were continually moved back and forth. While this was done reasonably efficiently, the non-existent set dressing did let the production down somewhat. As a result, there were several awkwardly blocked moments which undermined the full comedic potential of the performances by restricting body language. Joan and Harry never really looked at home and comfortable in their environment. One would have thought the better option would be to dress either sides of the set and just switch lighting for each scene. Regardless of restrictions to realism - each actor is to be commended on the connected, flesh and blood delivery they each give to their lines. Young Theo Rule is truly heartbreaking as Beane and Giverny Lewis - possessed of enviable stage presence - is pitch-perfect as the zany Molly. Another small gripe though is that the play wasn't given a lengthier run in order to give this extremely watchable cast time to fully realise this sharply-observed play's potential. This season opener augurs well for the rest of the company's 2013 season.