Love You Hate You Drive You Wild 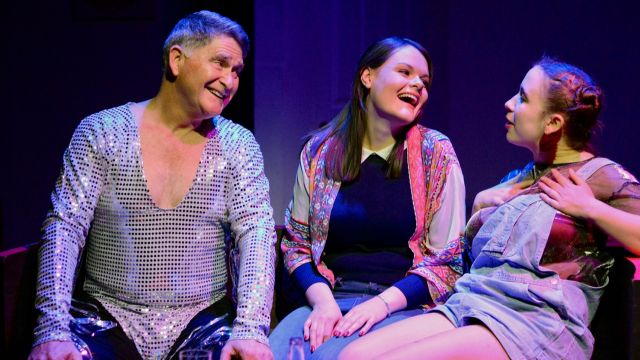 Imagine your picture was used as the subject of a meme and it ruined your life. That’s the amusing premise behind Love You Hate You Drive You Wild. The story is a black comedy that deals with themes of mental illness, sexuality, friendship and bravery. Who knew a play that explores ideas such as depression and suicidal thoughts could be so uplifting? Yet there is a beautiful sense of love and hope at the heart of this play.

Molly, played by Bianca Butler Reynolds (who also wrote the script), is a Canadian trying to regain control of her life. She’s moved to the other side of the world to escape her past. She’s also trying to shake her depression, which takes the form of a negative talking moose man (Brendan James).

Molly arrives to find the job she’d been promised has evaporated. Fortunately, she is befriended by an ageing David Bowie impersonator Gavin (Alex Lanham) and a ‘bipolar bisexual nymphomaniac’ Annika (Siobhann Finnes). Along her journey to heal, succeed and learn to stand up for herself, Molly encounters a series of dodgy employers and a hippy holistic healer (Darren King).

It was lovely to see such nuanced characters and especially nice to see empowered women and good male role models in this play. That said, this is not a play for kids. If you’ve ever had depression or been touched by suicide this may bring up some sadly relatable scenes for you. It’s also a bit raunchy in places, so probably best for those aged at least 15 and over. There was a palpable sense of teamwork and support among the cast a crew on opening night. James Elliott’s set design was simple and successful at supporting the narrative’s many scene changes. Lighting design by Natalie Callaghan was effective and well-timed. Costuming by Rachel Colin successfully enhanced the comedy.

The entire cast’s acting was believable when it had to be, farcical when the comedy needed it. Siobhann Finnes was fearless as Annika - a role that would have definitely been challenging and terrifying for most actresses. Darren King’s hilariously timed performances for each of his characters (Clive, Lionel, Edward, Pete) had us looking forward to seeing what he’d do next. If played differently, Molly could have been annoying and Gavin could have been a creepy old guy. Instead, the actors (Bianca Butler Reynolds and Alex Lanham respectively) played them with heart and sensitivity, giving us characters with whom we could fall in love.

While the actors are to be commended for this, it shows real insight from their director, Kat Dekker. She employed clever metaphors for depression and drew courageous performances from her cast. The staging was well balanced and scene changes were slick. This is a director who knows how to serve the comedy without shying away from committing to the moments of tragedy. There are so many ways in which a script covering these subjects and requiring such range from the performers could have gone wrong. It’s a real testament to Ms Dekker’s skill as a director that she’s guided her cast and crew to create such moving and entertaining work.

Love You Hate You Drive You Wild shows what can happen when an interesting script is brought to life by an enthusiastic and talented cast and crew under the guidance of a skilled director.