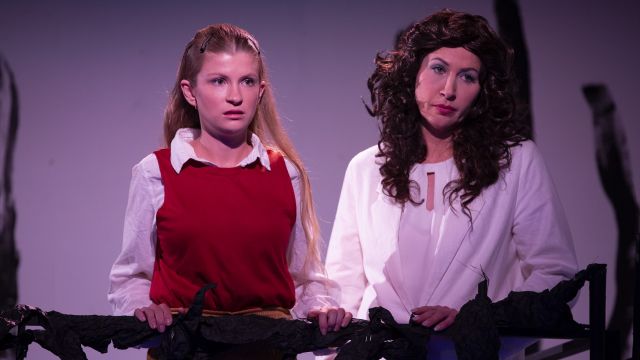 The Lovely Bones traces the aftermath of the rape and murder of a teenage girl as she looks down from a sort of ‘halfway house’ to heaven. She sees her family’s grief and disbelief at her disappearance at the fact that her body has never been found. She feels the frustration of not being able to tell them that her father is on the right track when he suspects old Mr Harvey, who builds doll’s houses and monuments to his dead wife and hides “trophies” of other murders in a hidden casket.

It's not an easy story to re-tell, especially as it’s based on a semi-autobiographical best-selling novel that has been translated into 45 languages and adapted for the screen by Peter Jackson. It’s certainly not an easy story to put on the stage. This adaptation by Bryony Lavery follows the original book relatively closely – including direct quotes that exemplify the novelist’s ability to create an impact on her readers:

Susie: My name is Salmon, like the fish; first name, Susie. I was fourteen when I was murdered. 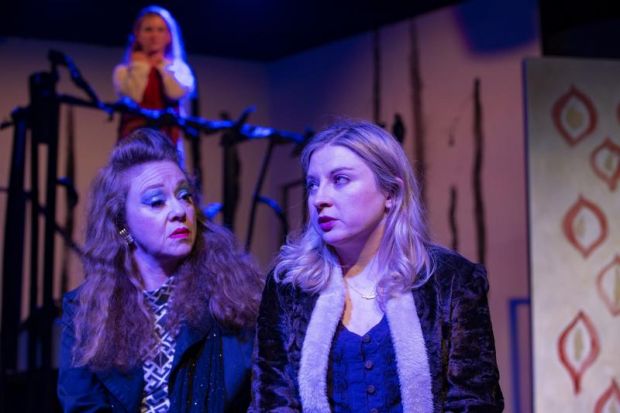 Alice Sebold’s phrasing is simple, expressive. Lavery uses that phrasing impressively to introduce Susie to the audience, then proceeds to recreate a story that is disturbingly of this moment. Stories of sexual assault, violence and abuse dominate local and international news. Sebold’s own story was one of them. She fictionalised it in her novel, and Lavery’s adaptation gives the characters a more immediate voice.

Deborah Mulhall’s production, beset as it was by a pandemic lockdown just as rehearsals began, takes place on a set that designer Robyn Arthur describes as a “fractured playground of contrasting heights and quirks”. Bare, twisted poles surround the “heaven” where  Susie (Sarah Maguire) and her guiding ‘angel’ Franny (Natasha McDonald) look down on the suffering and confusion Susie has left behind. The ingenious use of a fireman’s pole allows Susie to move into the real world, a ghostly presence that wishes her voice could be heard.

Franny: When the dead are done with the living, the living can go on to other things. 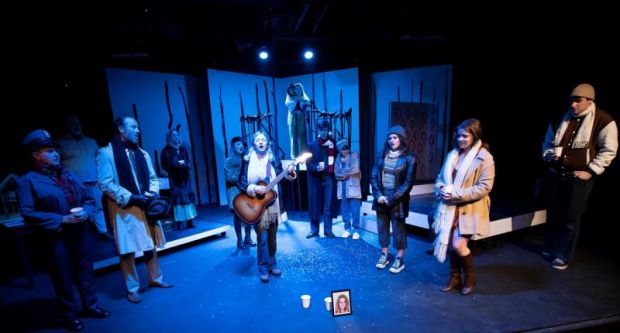 Maguire and McDonald carry much of the production. Maguire gives Susie a sensitive teenager’s perception and frankness. She questions, urges and pleads as she watches her family grow away from her. Maguire moves lightly on the stage, creating a spectral  Susie that is engagingly captivating.

As her ‘angelic therapist’, McDonald is open, supportive, just a tiny bit over-the-top. She answers questions when she can, leaves Susie guessing when she can’t, introduces a little humour that gently lightens Susie’s journey. 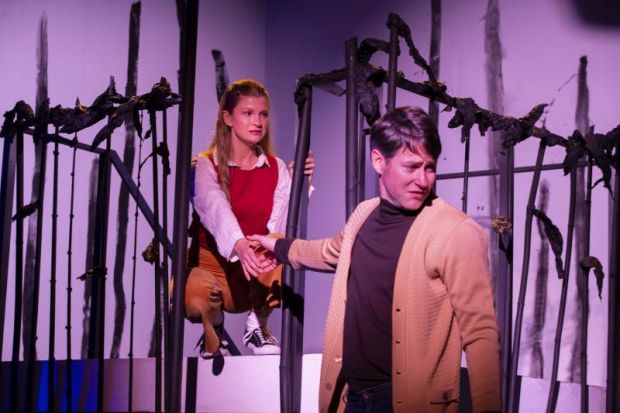 Unfortunately, the many scenes and anecdotes that punctuate the production do not gel quite as convincingly. A more subtle touch is needed in both the action and the continuity to make the characters more real – especially the older characters who need to find the layers that make them more three dimensional, their reactions more plausible, less jerky. This is a hard piece of theatre to negotiate. It is played out by 14 actors across many scenes. Susie’s family, friends and the local police trying to accept her disappearance and move on. The callous perpetrator continuing to insinuate himself into the community. All require more sensitive, sustained empathy to be truly believable.

Some aspects of the blocking are a little out of kilter with the seriousness of the play. An onstage costume change where costumes ‘swing in’ precariously on a hidden rack, and discarded costumes are flung indifferently over a flat. Five unnecessary mannequins representing the ‘perp’s’ previous victims hovering throughout the second act when the shadowy voices describing their plight would have been sufficiently effective. 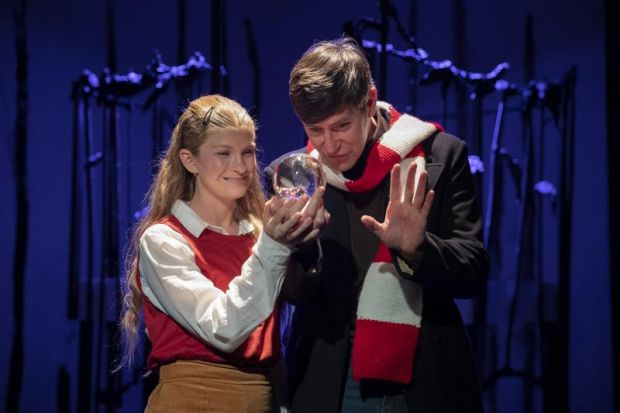 Continuity and pace will improve over the run; the cast will become more confident in their portrayals. And Sarah Maguire will continue to add Susie Salmon’s story to the stories that Grace Tame, Brittany Higgins and others are telling so intrepidly:

Because horror on Earth is real and it is every day. It is like a flower or the sun; it cannot be contained. Susie: The Lovely Bones.