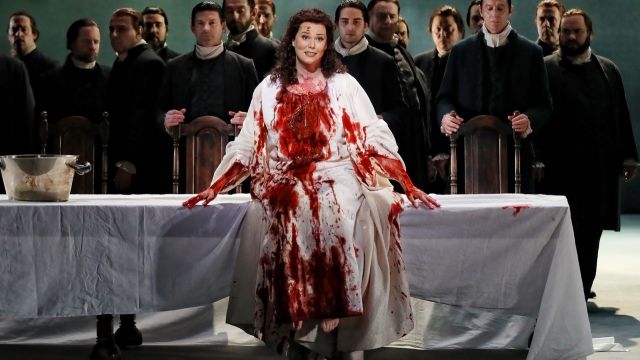 This opera is famous for launching the career of Dame Joan Sutherland into the stratosphere. The frenzied ovation on opening night had an intensity which brought back memories of La Stupenda.

Jessica Pratt was towering and terrifying as the insane Lucia. Her top notes could almost crack glass.  Driven to murder on her wedding night she enters the stage covered in blood. In a giddy night of highlights her duetto with a flute, at the height of her madness, was the most sublime moment of the evening as her voice and the instrument echoed then melted into each other.

Lucia di Lammermoor is a big juicy opera with a few minutes of happiness followed by several hours of misery. It has a swashbuckling story that will resonate with fans of the recent TV series Outlander.  Lucia has fallen in love with a dashing hunter (Edgardo) who saved her from a bull. Unfortunately her brother (Enrico) is determined that she marry someone else for political reasons (Arturo).

This fits the template George Bernard Shaw deliciously penned for opera. Soprano wants to mate with tenor but is foiled by baritone.

On opening night there was a storm brewing outside in Sydney which put everyone in the mood for the Scottish storm clouds depicted on the set. They dropped down starkly onto the stage, enveloped by the precise movement of the chorus.

The thunderbolts of singing didn’t just come from the leading lady. Michael Fabiano was commanding as the jilted lover Edgardo and Giorgio Caoduro as Lucia’s brother had a voice which sounded like a rich cello. They combine in the sextet Chi mi Frena in tal momento at the end of the wedding reception which masterfully combines beautiful music and drama in what is considered Donizetti’s master work.

This is a production for opera buffs to drink up and savor.