M: Kaddish for the Children 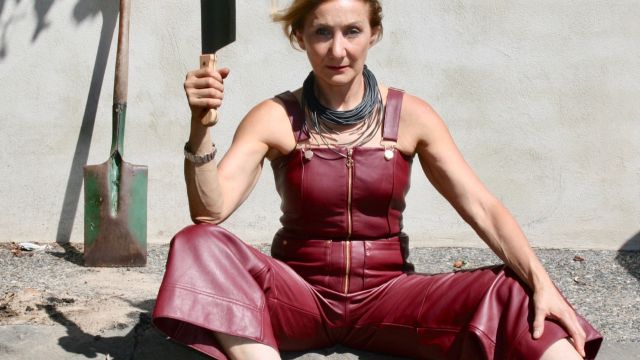 M: Kaddish for the Children is a truly unique personalized response to the story of Medea, presented as part of ‘Woman, Art & Politics 2019’, Footscray Community Arts Centre.

Ancient Greek Euripides’s play Medea, first produced in 431 BC, was based on the myth of Jason and Medea.  Daughter of a barbarian king, Medea defies her family to marry Jason.  A soothsayer and sorceress, she helps him gain the magic Golden Fleece.

The story is deeply disturbing and troubling in that Medea takes the lives of their two children in response to her humiliating betrayal by Jason. He abandons her to take on Glauce, the beautiful daughter of Creon the King of Corinth, as a new wife.

Medeais a tragedy from our theatrical cannon that is regularly re-examined, reinterpreted and restaged.

Deborah Leiser-Moore has been developing and honing a most particular/ individual and distinctive response to this classic.  The result is an evocative and perplexing, yet strangely satisfying, work in which she represents Medea and her real life husband Richard Moore represents Jason.

A feature of an Ancient Greek play is the Chorus - a group of performers who describe and comment on the story as it unfolds.  The Chorus is an homogenized collective voice speaking in unison or singing together - they are a kind of moral barometer, if you like.

In M: Kaddish for the Children there is no Chorus to guide our perceptions.  We, as individuals, make our own judgments and take/make meaning as we watch finely crafted and acutely timed actions and images.  These are supported, enhanced and enriched by an exquisite soundscape created by Jacques Soddell.   Much of the joy of the work is in pondering and clarifying the meaning of abstract and abstracted symbolic images and actions.  Surprisingly full of levity, it is condensed and refined to an impressionistic personal journey, that is distilled though the lens of contemporary experience and flavored with the Jewishness referenced in the title.  Archival filmic material that is heavily laden with the internalized male gaze of previous generations is juxtaposed with the live action, by being screened at intervals throughout. We watch Jason ‘work out’ - Jason ‘works out a lot’ and controls what music is being played on the record player, while Medea labours.  She is shifting what could be soil or fuel in a manner that infers building.  However this could symbolize burying.  Jason is ‘working out’ on his rowing machine.  Perhaps this represents literally rowing as he journeys with his Argonauts.  He appears to be working on the good of himself - for greater personal prowess.  And she appears to be working on a greater good - perhaps the good of her family, the community – to benefit their relationship.  She also chops herbs and cooks eggs.

On a large mountain of what looks like burnt chips of wood - to me - or perhaps a huge pile of bones as interpreted by my plus one, Ms. Leiser-Moore’s Medea searches for and extricates objects such as a difficult to remove wedding veil and later wind up musical toys.  She also fascinatingly disgorges a red ribbon she entwines her arms with.

Richard Moore has a lovely dignified stage presence and his voice and sincerity of expression is mellow and grounded.  He is himself and a representation of Jason - a kind of lingering archetype from the past and yet also a caring partner of today.  There is such a complex ambiguity in this.

The final frame of a woman walking on a bed of autumn leaves spoke to me of independence of walking away from an unsatisfactory situation and to my plus one it spoke of desolation and loneliness.

For me this work is haunting and pervading and the spirit of the piece speaks to me of a woman who knows her mind and pledges her allegiance, anticipating honour and affirmation as an independent autonomous person.  Embedded in the whole is that thing of responsibility to the self.  As contemporary women our identity is not completely entwined and defined by our circumstances or intimate relationships.

Choreography and Outside Eye:  Israel Aloni

Vocal Coach and Voice of the Kaddish:  Susan Bamford Caleo

Production Manager/video wiz and so much more Ben Beare