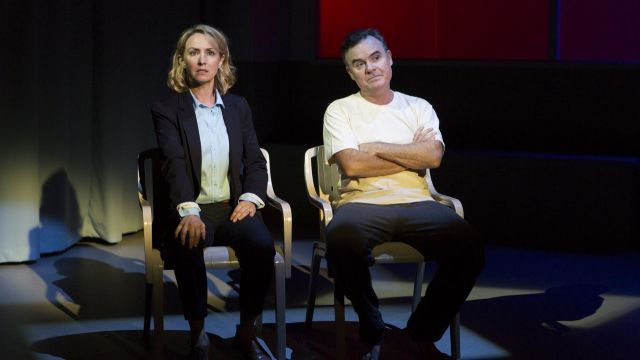 Haunted by a depressing cancer diagnosis, Sue Smith draws in this new play on own journey back to living in the moment and smelling the roses.

Paul is an idealistic, self-doubting engineer whose esteem is further challenged when he’s paralysed in a car accident.  From his hospital bed, with his academic wife Gabby, he daydreams back to moments in their relationship which they always wanted to remember as bliss - their engagement, the birth of their daughter Lucy.

These are some of the play’s best moments but this supposed model of a loving relationship is curiously unfleshed and without chemistry.  And so its later unravelling and then “paralysis”after the accident is ill-explained and without emotional impact.

Paul tries to recruit Lucy, now a doctor, to help him suicide; Gabby marches off without Paul to pursue alone their dream of seeing Macchu Picchu - with its perfect water engineering. Their friends, an unattractively egocentric couple struggling with IVF, provide more comedy than intimacy or illumination of what drives these four people.

Well-known comic actor Darren Gilshenan brings a good shabby vulnerability to Paul but seems miscast against Lisa McCune’s suitably taut and abrupt Gabby.  Luke Joslin and Elena Carapetis are entertaining as the friends; and Annabel Matheson is convincing as Lucy,  especially when wanting again to see that same love between her parents which used to intimidate her.  Renato Mussolini plays the psychologist who finally gets Paul in his wheelchair to live in the present.

Machu Picchu is a long, often enjoyable journey which, without the emotional detail and as directed by Geordie Brookman, reaches what feels a bland conclusion.  Jonathon Oxlade’s hospital set is backed by a wall of opaque windows behind which Paul’s demons and fantasies are sometimes paraded - even summoning Elvis at one point.

These inconclusive theatricalities play more like distractions, tugging us further from engaging with the reality of the key relationships. A co-production between the Sydney Theatre Company and the State Theatre Company of SA, Machu Picchu moves later to Adelaide.