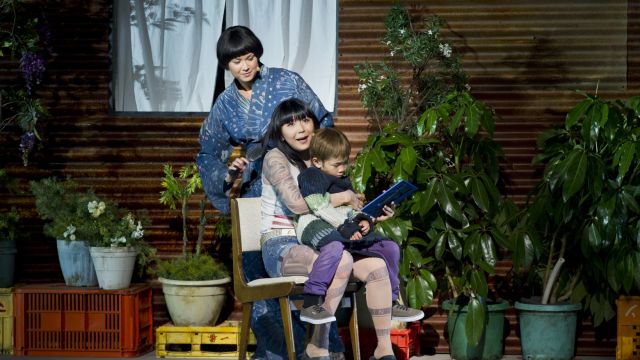 The idyllic natural setting of the first act, a lush pristine green slope, topped by an attractive grove of trees, is marked out with tell-tale white chalk lines, clearly being carved up for development. Large screens telegraph the message of Lost Paradise.

The action of Opera Australia’s Handa Opera on Sydney Harbour might well be playing out somewhere on our own foreshores, perhaps rooted in the unseemly desire to develop our remaining waterfront areas like Sydney’s Quarantine Station.

International masters of outdoor theatrical events La Fura dels Baus have eloquently created a spectacular Sydney event that is both entertaining and pertinent, complete with the kind of fireworks display this city so loves. Japanese soprano Hiromi Omura gives a stunning, vocally exciting and achingly vulnerable portrayal of the tragic title role of a 15-year-old geisha, who naively mistakes a marriage of convenience for the real thing.

Written in 1904 as an American naval officer visiting Japan, marrying what he clearly regards as a disposable bride, Pinkerton is transformed into a modern American property developer. He lets us know early on that what he really wants is a real American marriage.

Modern in interpretation, this tragic Grand Opera production resonates of Greek Tragedy in its epic style and proportion, apt when fate drives the narrative toward inevitable misery and a tragic outcome from the outset.

While sipping your bubbly on a pleasant autumn evening, spend at least part of the extended 35-minute interval watching the second scene take shape.

Massive cranes involved in the construction of the stage transition into a production element in their own right, lifting massive skeletal concrete constructions of the now-failed property development into place. An amused titter had passed through the audience in Act One when the diva playing Butterfly, in cocoon-like wedding gown, announced that she was fifteen, but in cut-offs and an American flag t-shirt in the Second Act, the illusion of a teenage mother seems all too credible; so does her yearning, optimism and grief. Hiromi Omura“Un bel dì” (One beautiful day) tears your heart to pieces. We know the happy ending she sings of is impossible, even though we’re romantic enough to want it.

I do have a small lingering afterthought. Some subtitle translations seem a little anachronistic to this updated interpretation, perhaps there’s an argument for being a little less literal, particularly as contemporising Madame Butterfly to the here-and-now makes the thought a marriage of convenience to a 15-year-old girl not just unpalatable, but grounds for a prison sentence. I’m told, however, that for opera I must learn to leave political correctness at home. The extraordinary experienceof Handa Opera on Sydney Harbouris as much a great Sydney event as an opera performance. The temporary outdoor theatre, with its rock arena sized stage, incorporates a bussing little village of bars and eateries, open two and a half hours before the performance. Unlike the Opera House, there’s $10 flat rate parking at the Domain, and a short shuttle ride or pleasant stroll.

Unique to Sydney, this Madama Butterfly is a very special treat waiting to be savored.