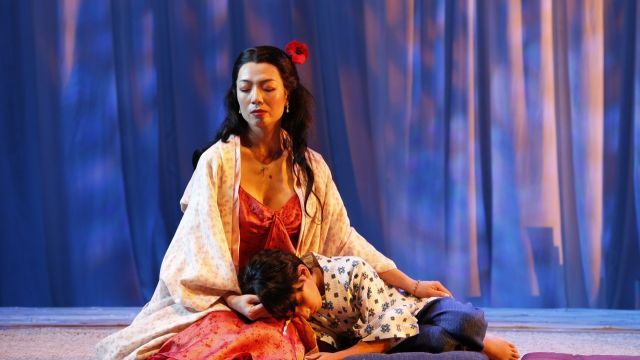 By Puccini, in an adaptation by Peter Hutchinson. Opera Australia. Riverside Theatre, Parramatta. August 18, 2018 and touring.

Once again, Opera Australia, supported by some generous donors, is ‘on the road’. Performed in English, in an adaptation by Peter Hutchinson that re-sets the opera into the mid-1950s, and directed by John Bell, a cast of wonderful singers accompanied by a chamber orchestra are taking Puccini’s Madame Butterfly to twenty-nine venues in NSW, Victoria, Tasmania and the ACT. This performance, to a packed house at Parramatta, saw them two thirds of the way through a tour that began early in July and will culminate at the Princess Theatre in Launceston on the 18th September.

Butterfly tells the tragic love story of a faithful Japanese wife, Cio-Cio-San, waiting patiently with her little son for the return of her American husband, Captain Pinkerton, only to find that he has taken advantage of an old Japanese divorce custom, and married again.

In each community, a chorus of local children, join the OA cast. Trained by local choir leaders, who have attended intensive workshops, the children have the envied opportunity to be part of the production – and in this opera, to take part in the famous “humming chorus”.

This, and the actual tour itself, require an enormous amount of planning and organisation, not least of which is the transportation of the set – cunningly designed for (fairly) easy transportation by Jennie Tate – musical instruments, costumes, wigs, lighting … and the cast and crew.

Tate’s set uses the simple, clean lines that are integral to Japanese design. A stage of wooden platforms, augmented by sliding screens takes the scene to a more contemporary Nagasaki than that of 1904 when Puccini’s work was first performed, though the ceremonies and rituals that are an essential part of his libretto are faithfully retained. The traditional costumes evoke the flowing lines and subtle colours of Japan and contrast with the deeper colours and fabrics of the more modern costumes. Into this setting comes Puccini’s music. The influence of Japanese music is evident in the use of the pentatonic scale with which Puccini suggests changes in mood and atmosphere. The travelling orchestra – two violins, a viola, cello, double bass, flute, oboe, clarinet, bassoon, French horn and keyboard – subtly evokes the emotions that he worked into the score.

There is romance and joy in the opening act, with Butterfly’s aria, her maid Suzuki’s prayers and in Butterfly’s duet with Pinkerton; and in the optimism of the famous aria ‘Un be di’ (One Fine Day). There is bitterness and despair in Suzuki’s attempts to prepare Butterfly for disappointment as she waits silently on the stage after she sees Pinkerton’s ship return to the harbour. There is wretched desolation as she gives up her son to Pinkerton’s new wife and lifts the knife her father used to commit hari-kiri to take her own life.

Sharon Zhai is moving as Butterfly. In the first act, her voice expressing joy and happiness in her marriage. With Matthew Reardon as Pinkerton, their voices soar, every note clear and precise, every harmony finding the special blend of voices and orchestra.

This faithful adaptation of the opera is taking its beautiful music and sad story far afield. The cast and crew have seen the ravage of drought-stricken NSW; performed in chilly Ballarat; and will soon see the lush pastureland of Tasmania. And audiences will thrill to them just as spontaneously as did the audience at the Riverside Theatre at Parramatta last night.