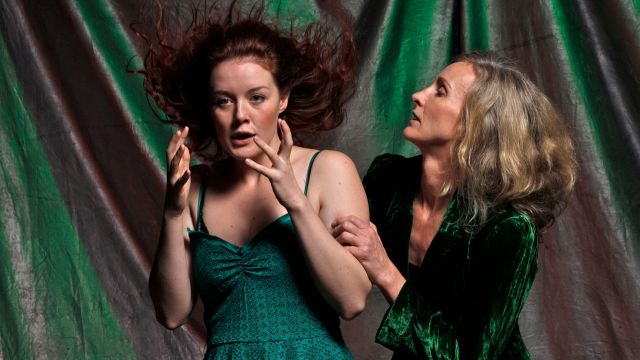 For decades Jenny Kemp has been blazing new trails in theatre making with her unique, intensely female, voice.

Madeleine is a strong and involving linear work. It commences with a muffled male voiceover making sounds almost recognisable as words. Having thus fully engaged the audience’s attention, this voice asks a young and beautiful lone actor how she experiences feelings. As her answers are given with deep sincerity, we are introduced to a complex and interesting way of seeing that could be an artist experiencing visceral stimulation as a springboard for generating work. However, as suggested through the insightful work of actor Nikki Shiels, there is something a little more irregular in Madeleine’s perceptions and therefore being.

Naturalistic scenes involving Madeleine’s family members create a relief, against which Madeleine’s turmoil is highlighted. The family are dressed in drab colours, in contrast to the vibrant green and purple of Madeleine’s attire. It is Madeleine who captures the audience’s imagination and empathy as a vibrant and vital being.

In this expression of a family dealing with mental illness, all points of view are evenly weighted by the uniformly strong work of the actors. Ian Scott plays Madeleine’s caring and sensitive, if not a little depressive, father. Her mother is played by Margaret Mills. This woman is an ambitious go-getter with a business focused orientation that allows no time for acknowledging or delving into psychological problems. The organised and self actualising sister Charlie (Natasha Herbert) tries to illuminate the problem and shatter the pattern of denial. However there are seething family secrets tethering all members to dysfunction.

At times the naturalistic scenes seem disjointedly didactic when contrasted by scenes of Maddie’s outlandish flights of fantasy. As a strange passive presence, her autonomy appears to depend on a deeper chasm of fanatical religious psychosis being dug towards irrevocable disaster.

This work is rich and dense with suggestion and ideas, whilst allowing space for thought and interpretation. It’s a strikingly relevant and intelligently probing work that presents a journey for the characters and audience alike.