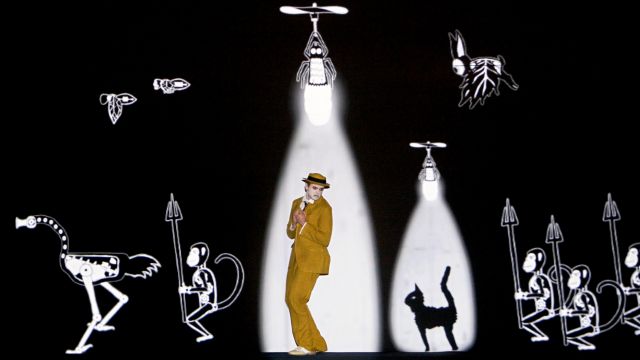 Opening the Adelaide Festival, The Magic Flute is a theatrical experience comparable to no other. This joyful offering - acollaboration between Komische Oper Berlin and London-based 1927 - is a psychedelic tour de force.

The ideas for this outstanding presentation germinated after Barrie Kosky saw a production by British theatre company 1927. He could see a new and exciting way to showcase Mozart’s enigmatic Singspiel. This production, co-directed by Kosky and 1927’s Suzanne Andrade, presents The Magic Flute, often described as “an Enlightenment allegory, veiled in Masonic ritual” in a two dimensional explosion of hand drawn animation by 1927’s Paul Barritt.

Mozart himself was a member of a Masonic lodge, reaching the high rank of Master Mason. The Magic Fluteis, without doubt, a Masonic allegory, encompassing the main themes of this intriguing society of good vs. evil, enlightenment vs. ignorance, and the virtues of knowledge, justice, wisdom and truth. We are confronted in spectacular technicolour with the four elements and many other symbols of the order, such as the ‘rule of three’- three ladies, three boys.

After the Overture, the red plush curtain is raised to reveal the hero, Tamino, running from the serpent. A giant white screen stretches the height and width of the stage, with Tamino behind a white box onto which animated legs, running fast to escape, are comically projected. The audience bursts out with laughter and is immediately ‘on side’ with this quirky version of the opera. It takes off running, like Tamino at full tilt, and carries us with it. The story of The Magic Flute has always been a complex one to understand, but when one surrenders to the ride and allows the symbolism to absorb, it is joyful. Tamino (Aaron Blake) is sent on a quest by the Queen of the Night (Aleksandra Olczyk) to rescue her daughter, Pamino (Kim- Lillian Strebel), who is being held by the evil Sarastro (Andreas Bauer Kanabas). Tamino is accompanied by a bird-catcher, Papageno (Tom Erik Lie). In the realm of Sarastro – a very surreal world, guarded by giant steampunk cartoon figures – the three are subjected to trials placed in the way of their quest. Three ladies (Mirika Wagner, Maria Fiselier and Nadine Weissmann), who work for the Queen of the Night, instigate this quest and guide the three along the journey. As with all quests, Tamino and Papageno are presented with a talisman - a magic flute (‘cartoonised’ as a flying fairy) - and some magic bells. These symbolise the power of music in life.

A key difference in Kosky’s version of The Magic Flute is the placement of the opera in the silent film era. The characters are reminiscent of movie characters - Buster Keaton (Papageno); Pamina, the daughter of the Queen of the Night, who resembles a Betty Boo style Louise Brooks; Monostatos -Nosferatu, and the awesome Queen of the Night, something from a schlock horror movie - a human skeleton with a gigantic spider’s body.Prince Tamino, in tuxedo, resembles a Hollywood idol, the Three Ladies could be any women from the 1920’s in coats and hats, Sarastro is a dressed as a (intriguingly Abraham Lincoln-esque) gentleman in a top hat, and Papagena, a showgirl.

The white wall set allows the kaleidoscope of colourful animations to create scenes around the characters - the fluidity of these and precision of timing by the actors, supported by the superb Adelaide Symphony Orchestra, create a mesmerising dreamscape.This use of projection allows much more creativity and variation than would normally be found in a conventional production of this opera. A stroke of genius is projecting the “sung-spoken” parts of dialogue on screen as in a silent movie. These are also accompanied by music from Mozart’s piano fantasias in C minor and D minor, played on a fortepiano.

There are so many elements to this performance and shareable moments that could be commented upon. Suffice to say, clever projections that create movement, the steam punk cartoon characters, exploding red love hearts , mechanical animals, butterflies and flowers, a flying flute exuding musical notes and even ‘Dumbo style’ pink elephants are only some of the myriad of visual explosions in this presentation.

Aurally, The Magic Flute is also a joy. Aleksandra Olczyk, as the spider-like Queen of the Night, brought chills with thecoloratura aria Der Hölle Rache kochi in meinem Herzen. This piece, with its string of High F’s was stunning. Strebel, too, as Pamino, held her own with strong, controlled arias; Blake’s beautiful tenor voice effortlessly portrayed the hero Tamino with charm; Lie’s funny, quirky baritone notes as Papageno were a delight, as were the harmonic voices of Three Ladies and the Three Boys.

This production is an experience. Whilst there was a danger of the music being overshadowed by the entrancing visuals, this was not the case. This is a tightly bound production with split second timing, mesmerising projections, stunning vocals and magnificent orchestral accompaniment.

Whilst the story is at times difficult to understand, this production is not to be missed. When I attended it was summed up beautifully by an overheard foyer conversation afterwards: “What a trip!”