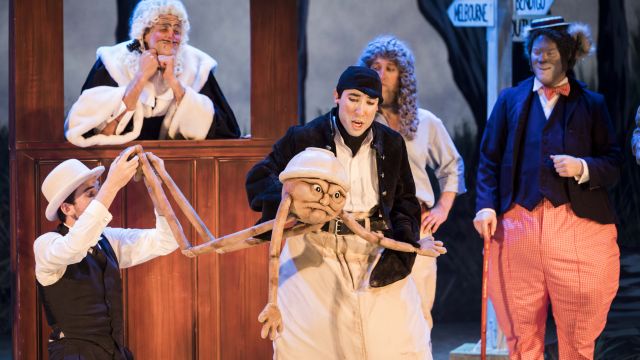 Continuing its strong emphasis on building opera audiences, Victorian Opera celebrated the centenary of the first print of Norman Lindsay’s The Magic Pudding by reprising their operatic incarnation.

It was a delight.

Designed for touring to schools and involving local community/school choirs, the set was simple but effective and would be easily transportable and fit into any venue. The choruses all appeared to be unison for ease of learning.

The costumes were amazing. Bass-baritone Jeremy Kleeman, singing beautifully, walked around with the grumpy pudding’s feet attached to his. Nathan Lay was equally impressive as Bunyip Bluegum, the koala, and his facial makeup was very special. Like many of the male characters, he was given quite a girth!

Tenors Timothy Reynolds and Brenton Spiteri were the other owners of the pudding, Timothy as a sailor and Brenton as a penguin. Both sang well, but their roles sat a little low and didn’t give them much opportunity to shine.

Mezzos Shakira Dugan and Shakira Tsindos did well as the Pudding Thieves and Carlos Barcenas was a very funny Judge. Coloratura Georgia Wilkinson was the narrator and did well, but she would have preferred the role to be a lot higher.

The small orchestra acquitted itself well, and the diction was generally excellent.

The audience, many of them quite young, were enraptured. An excellent night at the opera.