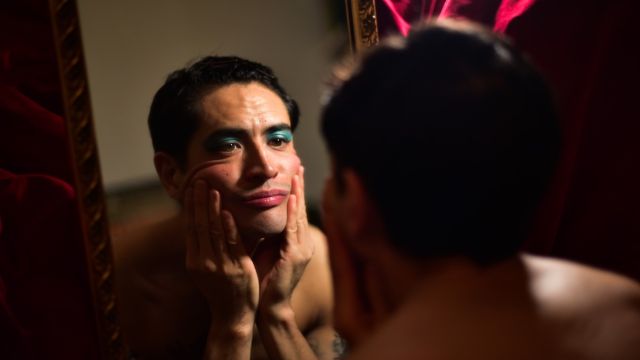 ‘Lady Christina’, drag queen, completes her routine - with Hey, Big Spender’ – and wearily comes off a Wolverhampton stage to her dressing room.  The audience demands another encore, but they’d already had two.  The applause goes on and follows Lady Christina back to her dreary dressing room.  But the façade and the make-up come off – as they must . And drag has become a drag (as the program notes say).  As she kicks off the high heels with palpable relief, pulls off the wig, unpins the bobby pins and begins to wipe away the make-up, Lady Christina – or Christopher Laneghan, her creator, the man to whom she is his alter ego - is on the verge of giving it all away.  Sick of the seedy venues, the salacious or blasé audiences, the young wanna-be’s who think all you gotta do is put on a wig…

But if she does give it all away…  then Lady Christina, the creation, the persona that is loved and applauded, will be gone.  Hung up like the dress tossed on the clothes rack, tossed like the wig into the carry bag, dropped like the painful high heels.  And what will be left then will be no more than just poor Christopher Laneghan, a lonely, unloved, derided gay nobody in jeans and a check shirt.  What could he do?  What could he be?  This is a show about the persona – how and why we invent such alternate beings – so as to escape or to fit in - and how that invention becomes more real than the inventor. Moj Taylor’s performance is focussed and sincere – the emotions he evokes are absolutely believable – but there is a barrier to engagement that cannot be intended. As a piece of writing and performance, there are curious decisions.  The quick grab of Lady Christina on stage is perfunctory and, frankly, not too convincing.  This act, we wonder, is a success?  The singing is not great, the gestures mechanical and there’s not a trace of glamour or the faux ‘feminine’, cliché though that might be.  Perhaps writer/director Andy Moseley figures an establishing gesture in the drag queen direction is enough.

Then perhaps half – or so it seems – of the monologue is devoted to Christopher’s railing against his monstrous, bullying, terrified-of-his-mates’-opprobrium father.  It’s is painful and sad, but, without wishing to be callous, it’s, well, familiar.  The point is that it is escape from this father that led to the creation of Lady Christina.  There is also the straight teacher who was sympathetic and encouraging – and who was driven out for it.  More interesting is Mum – sneaking off to see her boy in secret.  That also, is familiar, but most poignant of all – and the most intriguing idea - is the intimate, confiding relationship Mum formed with… Lady Christina.  What scenes there might have been conjured up of Mum sharing secrets with her son’s creation – and not with her son.  We could have done with more of that and less father.

I was reminded of a show at the 2019 Midsumma Festival, Party Snake, written by Kotryna Gesait, performed by Lachlan Martin – a monologue play about a drag queen stripping off her ‘skin’ at the end of her night – a show with almost identical themes but quite devoid of self-pity.  That Party Snake drag queen has a second persona in place – force majeure – as much an invention as the stage drag queen - because we must survive, we must go on.  It was heartbreaking – but then that was a live performance, and I was in the front row. 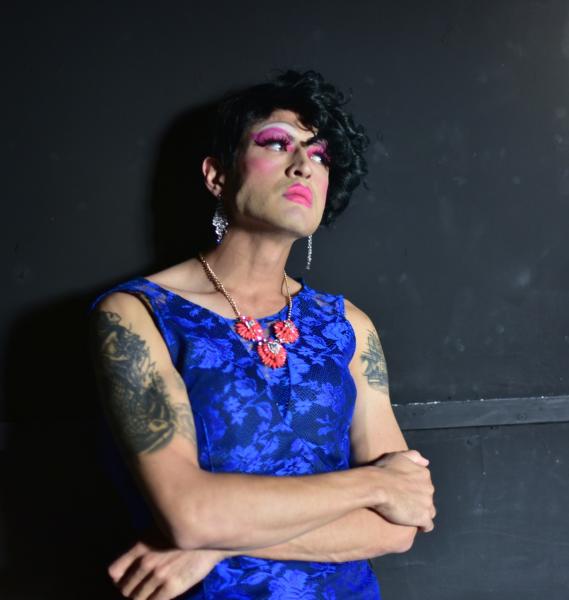 Although there are some nicely disguised jump cuts in this online version of Make-up that indicate that this is an assembly of pieces of several performances – or of different takes – Make-up is a no frills record of Moj Taylor’s performance.  The monologue is sometimes directed at us, sometimes at her/his reflection in the dressing room mirror, but most often directed to the bullying, homophobic father who never loved his weird, fey boy.

It’s all shot from one unwavering camera position – call it a medium wide shot.  No pans, no tracking, no close-ups, no cutaways, no shots of what Christina/Christopher can see in the mirror.  It is pretty much what one would have seen were one in the front row at the Etcetera Theatre, Camden, UK, where the performance was filmed.  Unfortunately, here is a definite case of it would have been far better (perhaps) to’ve been there.  Although the shot never changes, we are never unaware of the camera.  As an online presentation, a more filmic sensibility is required.