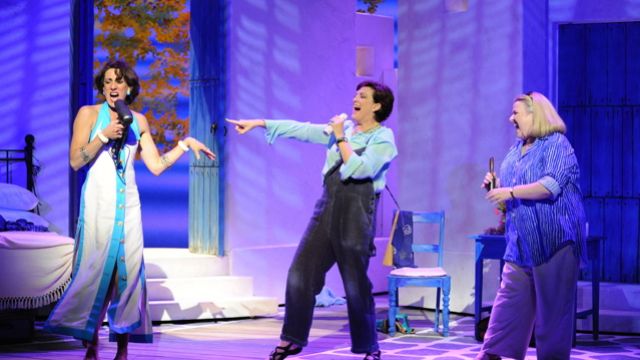 As I sat down to watch Mamma Mia! the thought crossed my mind, if you enjoyed the original stage production and the recently released movie, what would make you want to see it again?
When I first saw the stage production, the obvious lumpy bits where Abba songs are dropped in and don’t quite fit the narrative made it a slightly jarring evening for me.
Like a shoe that has been worn in, I found myself enjoying the musical more this time.
Be aware, though, this is a production which relies on the music, and the story rather than a flashy set.
At the centre of the stage are the walls of a villa on a Greek island on a revolve. The sharp white walls are contrasted with a brilliant blue at the back of the stage, representing the shimmering Mediterranean.
The biggest visual treat came during a dream sequence, where dazzling colours on the backdrop combined with brightly coloured dancers in their flippers and snorkels.
Just as the staging was minimalist, so too was the music. It looked like you could fire a canon into the orchestra pit and not hit anyone.
To be fair to the producers, Abba themselves only had a few instruments as backing.
Under the skilful direction of Darren Yap the cast allowed the songs to shine.
Inevitably I was comparing some performances to the movie.
I don’t think anyone will ever be able to top Meryl Streep as Donna Sheridan. Anne Wood had the impossible job. I found her credible and sweet, but over-shadowed by the Hollywood heavyweight.
Michael Cormick as Sam Carmichael certainly out sang Pierce Brosnan.
Robert Grubb, as Harry Bright, didn’t have the charisma of Colin Firth, but I enjoyed his acting just as much.
David Somerville as Sky, and his fiancé Susie Mathers as Sophie Sheridan, I found quite charming.
The stand out performance for me was Lara Mulcahy as Rosie.
The performance ended with the traditional Abba medley sing along.
So to answer my opening question – why go again? The answer is that Mamma Mia! remains a night of great entertainment with wide appeal for the general public.
David Spicer