Man With The Iron Neck 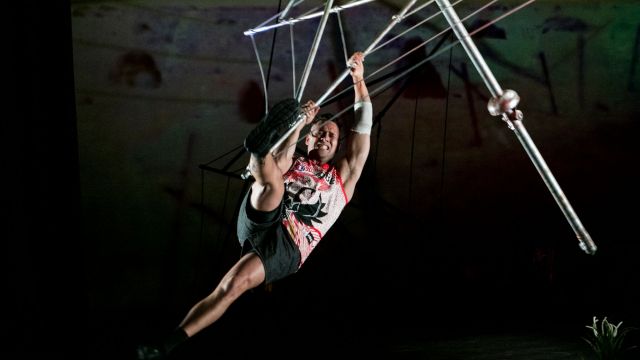 Legs on the Wall's Man With The Iron Neck by Ursula Yovich is based on the book by Josh Bond, and is about youth suicide within a tight and loving indigenous Australian family.

Co-directed by Josh Bond and Gavin Robins with a terrific cast of indigenous Australian actors, including Ursula Yovich, this an extremely moving, poignant and spectacular production about something that is relevant and important to us all.

Before the play begins, the mood and atmosphere in the theatre created by the set is one in which we can all relate. On stage there are two large Australian icons – a gum tree and a ‘Hill’s Hoist’ clothes dryer. Both play their roles in the ensuing drama. Surrounding them is a large cyclorama screen that has on it beautiful images of the Australian ‘bush’.

Furthermore, the pre-show ‘welcome’ by local indigenous elder Auntie Georgina and David Cole from the Baluna Foundation, which was also a ritual blessing, was unlike any other I had experienced – it was beautiful and profound. Man with the Iron Neck is also unlike any other production by Legs on the Wall that I have seen.

The set by Joey Ruigrok, the lighting by Matt Marshall, video by Sam James, sound by Michael Toisuta and Jed Silver, as well as the costumes by Emma Vine, are all highly significant and work together in great harmony and power as to be expected from a Legs on the Wall production.

There are the usual thrilling aerial gymnastics and stunning visual and sound elements that are characteristic of this company. However, all these are subservient to Ursula Yovich’s play, a dramatic narrative about youth suicide. The sensitive way this has been treated by all involved makes this more than about indigenous concerns but powerfully embraces the entire issue of youth suicide.

The title refers to an early 20th Century indigenous stunt man called ‘The Great Peters’, who was also known as ‘The Man with the Iron Neck’. This was because of his ‘act’ that involved hanging himself from a tall height without breaking his neck.

We are introduced to this ‘show-biz’ tale at the beginning of the play by Ash (Tibian Wyles) in a rather ‘razzle-dazzle’ way. However, despite the theatrical appeal (as stated in the program leaflet) ‘what he promises is impossible’. Following this ‘prologue’ we then meet Ash’s girlfriend, Evelyn (Caleena Sansbury), and her handsome and athletic twin brother Bear (Kyle Shilling). Evelyn is hanging out the washing on the ‘Hill’s Hoist’. In a delightful, playful and joyous scene we learn that Ash has won a scholarship that will take him to a university in Sydney, whilst Bear is up for selection for the AFL team, the Sydney Swans.

The future is looking bright and wonderful for these three young people, and is celebrated by the obligatory fun-filled swing on the ‘Hill’s Hoist’-a memory many of us share-but they subsequently break the Hoist. They flee once they realize that Mum Rose (Ursula Kovich) has returned home; ‘Run for your life!’ cries Ash.

We then meet Mum Rose who is a single mother afflicted by the dreams and memories of her past. In a truly brilliant sequence, which briefly touches on far distant historical atrocities, we learn the fate of her beloved husband who whilst suffering chemotherapy for cancer committed suicide by hanging himself from the gum tree in the backyard.

The influence of ‘ghosts’ from the immediate past is the problem that will ultimately tear this family apart with the suicide by one of the three young people.

However, as stated in the program leaflet, this production is ‘Less a story about loss than a story about embracing life’. This is emphasised by the maternal strength and resilience of Mum Rose who, after the youth suicide, counsels the distraught and guilt-ridden Ash, stating that the cause ‘Is not the land but something inside’ the individual human being. This is followed by another heart-breaking scene in which Ash appeals to his ‘ghost’ from the past to ‘let him go’ so he can live his own new life.

This ‘letting go’ of the ‘ghosts’ of the past, be they in the distant historical or immediate past, is a theme in a number of productions in this year’s Adelaide Festival, including Belvoir Street’s Counting and Cracking and the Isango Ensemble’s A Man of Good Hope. As Mum Rose says in Man With The Iron Neck, every day you have a choice – between love and life or self-hatred and death. Sometimes this means ‘letting go’ of once treasured people who now are a hindrance to the living. If you have never seen Ursula Yovich on stage then that is reason enough to see this beautiful and moving production. She is absolutely mesmeric, delivering a performance of great range, depth and humour.