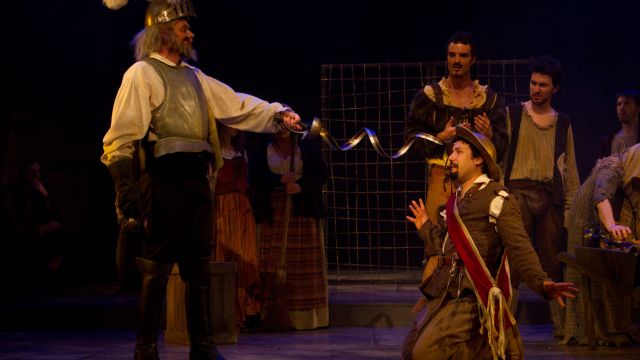 Man of La Mancha confuses me in such a delightful way because… well, it just shouldn’t work. Dale Wasserman’s book takes great liberties in its interpretation of the life of Don Miguel de Cervantes Saavedra, and requires such a suspension of disbelief it is surprising that the audience agree to go along for the ride. Not only do Cervantes’ fellow prisoners allow him to save his novel by presenting them with a play, they agree to help out and join in, playing anything from prostitutes to ponies! Man of La Mancha is completely absurd - and an absolute triumph of the genre.

On entering the theatre the audience was met with one of the largest sets I have seen in an amateur musical theatre production. The dungeon (designed by Graham McGuffie) filled every side of the stage from floor to ceiling and included an open top fireplace and well. By far the most impressive set-related moments were the drawbridge entrance to the dungeon that lowered from the ceiling! A masterpiece of design and, coupled with Alan Green’s audio, this single piece of set was worthy of its own curtain call.

Musical Director Tyson Legg created an absorbing soundscape with a talented cast and extensive orchestra that included on-stage performances by Spanish Guitar player Mark George. A well-known talent, Legg steered his musicians through a sea of compound rhythms, with highlights including dialogue underscore (often considered trite by lesser directors) and flexible tuning during the opening scenes. Number highlights included “I’m Only Thinking of Him” and the “We’re Only Thinking of Him” tag (performed by Frederica Cunningham, Barry Mitchell, Amanda Stevenson, and Gerard Lane) and “Dulcinea,” performed by Zak Brown, Sam McPartlan, and the Muleteers.

Brown created a manic, adorably naïve, and easily lovable Cervantes/Don Quixote. He tackled the challenging role head on, presenting one of the most genuine interpretations of “The Impossible Dream” I have heard. This song, like “Anthem” from Chess, is too swiftly thrown aside by performers and musical directors today and both Brown and Legg are to be congratulated for breathing fresh life into a well-worn piece. Brown’s transformation from Cervantes to Don Quixote in Part 2 was a pleasure to experience.

Another theatre veteran, Adrian Carr, played Don Quixote’s sidekick Sancho Panza with an endearing performance of “I Like Him.” I was surprised by Carr’s New York accent, considering the rest of the cast was using neutral or Spanish inflections. I am unsure whether this was directorial or actor-devised (as Shaun Kingma’s Director’s Note implies that it could have been both, or either) but I believe the audience would have easily understood the character’s comic-relief role without the need for conventionality.

Once again, director Shaun Kingma had me shaking my head in disbelief. Is there anything this man can’t do? With this production he has created a coherent masterpiece of imagination and ingenuity. I especially enjoyed the opening of Part 2 that began with the same sound effect of the drawbridge from the final scene of Part 1, dropping us straight back into the story as if interval had never happened.

Man of La Mancha is CLOC’s latest production. Imprisoned by the Spanish Inquisitors, Miguel de Cervantes undergoes a mock trial at the hands of his fellow prisoners. In his defence he tells the story of Don Quixote, a man who imagined himself a knight, fighting giants and chivalrously defending ladies.
The CLOC cast excel in a testing task for the actors, first playing prisoners, then changing characters back and forth several times during the production to act the parts of the Don Quixote story.
The stage is excellently set as the dungeon with entry and exit through a door high above the stage, by means of a stairway lowered from the roof. The sound effects of the rattling chains were outstanding creating the sense of doom as the stairs disappeared upwards, leaving no way out.
As Cervantes and Don Quixote, Zak Brown gives an outstanding performance, not only as an actor, but displaying a magnificent voice, strong and clear as you expect for such a role. His change of character is well achieved. With the sudden addition of grey beard, moustache, eyebrows and assumption of attitude, Brown became the elderly, puzzled Don Quixote.
Adrian Carr gives a wonderful performance, both as Cervantes’s servant and then Sancho Panza, adding a light touch to the essentially dramatic performance.
How many does bruises Rosa McCarty suffer during the production, playing the dual roles of inn prostitute Aldonza and as Don Quixote’s idealised lady his Dulcinea? McCarty handled the characters with finesse and was magnificent in the rape scene. Her singing was a wonderful balance to Brown.
Another successful character transformation was that of Barry Mitchell, from idiot prisoner to padre. Cervantes initially said no, but eventually acquiesced to the insistent prisoner. In a simple but very effective move, Cervantes waved his hand down Mitchell’s face and the change was absolutely fantastic.
CLOC produced an outstanding evening of musical theatre. A good balance between voices and orchestra is achieved, and the choreography is superb, particularly in the rape scene which would be one of the most brutal scenes on stage for a long time.
A magnificent production, possibly the best your correspondent has seen for several years, equal to any other professional production showing currently in Melbourne and not to be missed.
Peter Kemp