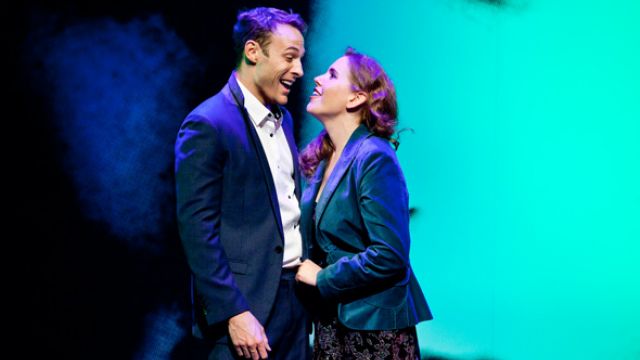 Possibly the only production I’ve ever seen in which a character’s transvestism was something other than a tacky sales gimmick, Managing Carmen is the tale of a top footballer’s increasingly bizarre relationships with his girlfriend, his agent–manager, his most ardent critic, his (belatedly announced) psychologist, and his shadow, as a secret hobby threatens to expose them all to ruin.

Not truly realistic (Williamson’s psychologist confuses appetite with “normal” addiction, and the transvestite’s motives lack plausibility), the play is less an exploration of the wellsprings of character than simple drawing-room comedy. Its cast of five leaves no moment unturned, even in the scene changes, which the simplest of set alterations rapidly effected. Lighting was interesting, mostly realistic, and strong; and subtle soundscapes provided auditory realism. Perhaps the production’s single weakness was the dowdy uniformity of the supposed designer dresses in which our transvestite’s alter ego appeared.

To see the characters interact unreservedly was a delight. Though all the male leads were particularly strong, Jamieson Caldwell, playing double-Brownlow-medallist footballer Brent Lyall, stood out, conveying more through posture, gesture, and expression than he could have in emphasising lines in the play’s most challenging role.

Make no mistake: this is serious comedy, with no serious bone to pick. Come along prepared for a laugh, and you won’t be disappointed.