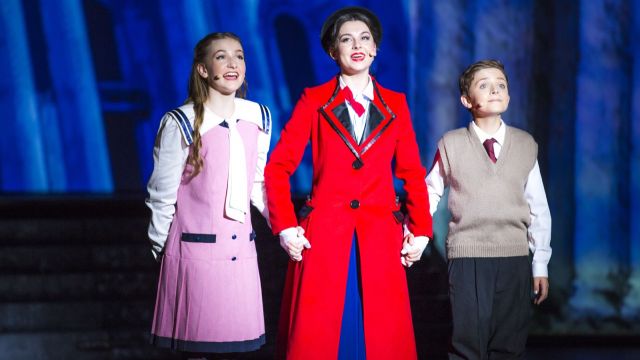 A musical based on the stories of P.L. Travers and the Walt Disney Film. Original Music and Lyrics by Richard M. Sherman and Robert B. Sherman. Book by Julian Fellowes. New songs and additional music and lyrics by George Stiles and Anthony Drewe. Co-created by Cameron Mackintosh. Originally Produced by Cameron Mackintosh and Thomas Schumacher for Disney. The Australian School of the Arts. Redland Performing Arts Centre (QLD). April 21-29, 2017.

It’s a brave director that decides to stage a musical such as Mary Poppins. Darren Harvey is clearly one who understands the gravity of bringing P.L. Travers’ heroine to an audience that know her intimately.

Mary Poppins The Broadway Musicalwas a testament to The Australian School of the Arts’ audition based ‘professional’ arts excellence program. The show was packed with performers, stage hands, lighting, sound and costuming that you’d expect from an internationally touring musical commanding triple-figure ticket prices.

It was supercalifragilisticexpialidocious to have a full, live orchestra and fourteen stunning backing vocalists in the room with us too. While at times the orchestra drowned out the performers’ vocals, one imagines it’s the sort of technical glitch that would be fixed by the second show.

Chloe Crick is to be commended for her portrayal of Mary Poppins. Her singing, dancing and acting was exemplary. No stranger to the professional stage (Annie/ West Side Story), Ms Crick is sure to have a bright future in musical theatre.

Aside from Mary, Emmerson McMillan as ‘The Bird Lady’ brought tears to the eyes with her melodic singing and mature acting in “Feed the Birds”. Jack Vernon as George Banks also displayed some acting maturity beyond his years.

Comedically speaking, a few of the jokes in the musical fell a little flat. There were, however, plenty of laugh-out-loud moments too. Every one of Michael Banks’ funny lines was delivered with excellent comic timing by Joshua Thompson.

Set changes were instantaneous, and because the most of it was digital, the set could include animation. This directorial decision added a lovely level of magic to the show. In fact, one of the biggest stars of the show was the magic, much of which was built into the very clever physical set design. Fly wires and special effects worthy of David Copperfield added that ‘wow factor’ to the musical.