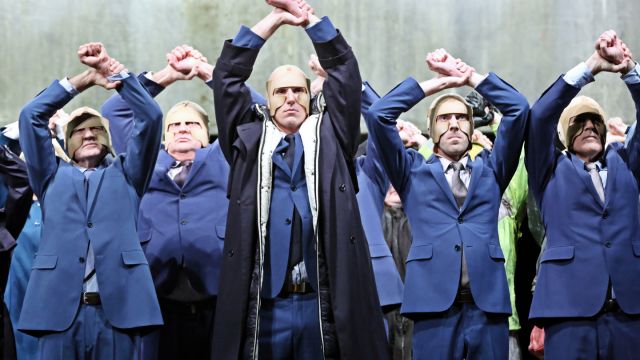 The opera opened with striking 3D images of young and beautiful bodies, onto which pictures were projected of dramatic moments. A high and deep cement structure then descended, pieces rose up and down, sometimes creating balconies.

Onto the stage came the enormous chorus, all in suits, only differentiated by the numbers printed on them. They were wearing white padded helmets over their heads. An unkind member of the audience said they resembled bandages.

Another scene in the King’s ‘office’ had a backdrop of giant video screens allowing the Dictator to spy on his people.

This incredible looking production was a joint effort of Opera Australia and four other companies in Europe and South America.

The Director Alex Olle explained his vision as having an “aesthetic underpinning in an Orwellian view of the future, but it also sets this version’s discourse in the distrust that the concept of power creates in each anonymous individual.” 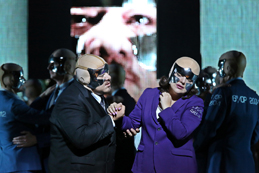 One can understand that although the Opera was written in 1859, given that it is set against a backdrop of political intrigue and assassination, that some sort of modern interpretation could work well.

However for my liking the look of the set was so extraordinary that it left me at times thinking, what on earth is all this about?

It was at times a distraction from the singing.

This was a shame because the performances were in many respects faultless.

Thunderous ovations for the ensemble and leading cast members  - Diego Torre as the King, Tamar Iveri as Amelia and Jose Carbo as Count Ankarstrom were well deserved.

For those new to A Masked Ball, be warned it has moments of extended repetition in the first act, without the smash hit arias of other Verdi classics. This is an Opera for the purists.