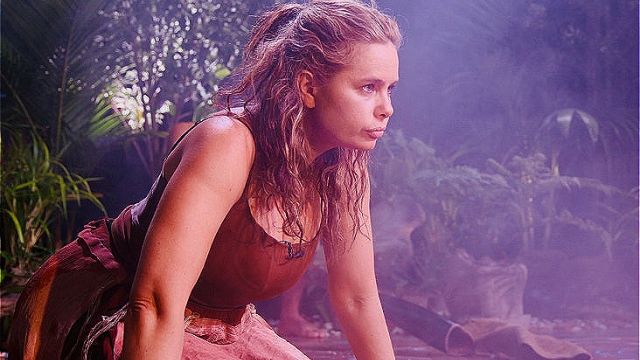 Matriarch opens with the entrance of actor Sandy Greenwood as an energetic and lively young girl expressing her delight in country and collecting berries for her numerous siblings.  Greenwood, a consummate indigenous performer, from salt water Bloodlines and Songlines, appears, almost magically, to be bathed in the vital and rejuvenating spirit of country in this beautifully recorded version of her show.

She then moves on to playing one of the commanding Matriarchs of the title - making food and helping a little one with an injured bird, before she introduces herself to the audience with strength and purpose.  Over the next hour Greenwood tells and re-enacts aspects of the extraordinary history of the women from her matrilineal line.

In this one woman show she presents deep, wonderfully well-rounded and telling characterisations.  Her transitions from character to character are superbly fluid.

A voiceover telling of a ‘dreamtime’ story of how the coast was created is almost danced by Greenwood. This story is exquisitely embodied and portrayed.

This work, having been around for a number of years now, is beautifully honed and polished. There is an outstanding quality and cohesion of production values. It is the best Theatre In Education piece - marvellously engaging and atmospheric for the audience, with its set of plants in containers, various projections, sound tracks, strategic lighting and the splendidly authentic use of the digeridoo.

Minjarrah Jarret plays the digeridoo and helps out as male characters. He uncannily imitates gun shots on the didg during the retelling of The Bloodrock Massacre.

Matriach doesn’t shy away from the harsh realities of what First Nations people have been enduring and the resulting debilitating intergenerational trauma. But with Greenwood speaking truth and searching for ways to move forward comes uplifting optimism.

This show is a glistening polished gem.