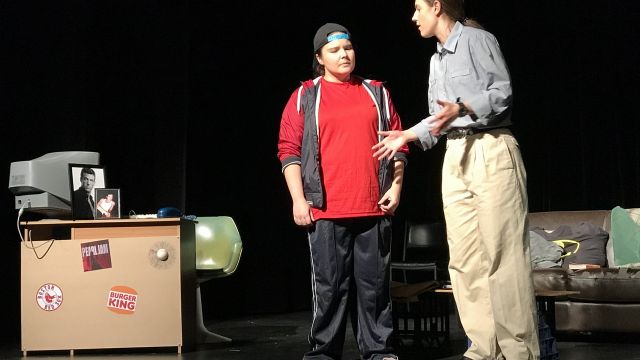 By Mindy Kaling and Brenda Withers. Oily Rag Theatre. Back to Back Cabaret Festival, Star Theatres. October 20th and 26th, 2018

Arriving at the theatre knowing only that I was to see two female actors in a play about how Matt Damon and Ben Affleck came to write Good Will Hunting, I was totally unprepared for what ensued.

Matt & Ben, presented by Oily Rag Theatre, is a short, sharp, vitamin pill of energy. At 60 minutes, it carries the audience on a joyful and very funny jaunt based on a day in the life of the two Cambridge friends. Good Will Hunting was tothrust Damon and Affleck into the international spotlight, as big winners at the 1998 Oscar Awards, with the award for Best Original Screenplay. The play Matt and Ben was written in 2002 by Mindy Kaling and Brenda Withers and was first performed at the New York International Fringe Festival.

The story of how these two struggling young actorscame out of nowhere to win an Oscar for writing Good Will Hunting is well known and this satirical offering explains the miracle behind this -the screenplay fell from the sky! It arrives fully written in Ben’s daggy 1990’s Boston apartment with the boys’ names as co-authors on the cover. The play revolves around the dynamic of Matt and Ben’s friendship as they try to figure out what to do with the script. We see immediately that Matt is the smart one and Ben is the handsome one, cruising through life with minimal spelling skills. At the play’s opening, the two are plugging away at writing a screen adaptation of Catcher in the Rye, when the script arrives in the room.

The Director, Kristin Telfer, has found two perfect young actresses to play these male roles - Louise Byrne (Matt) and Jennifer Barry (Ben). They embody the roles, without creating caricatures. Byrnes has the mannerisms and laconic style of Damon to a tee and Barry is an absolute delight as the puppy-like, creative, Affleck. These actresses also showcase comic timing, a high level of skill with accents and great physical theatre.

Telfer’s direction is tight and the script is sharp and witty.

There are too many funny moments to single out all, but some which need particular mention are the flashback to a high school talent competition where ‘Bridge over Troubled Water’ is butchered by Damon, accompanied by a frenetic Affleck on tambourine, a slow motion full on physical fight between the two, and the cameos (also played by Byrne and Barry) of Salinger and Gwyneth Paltrow. There is more than a fair share of irony in this play with regard to the future relationships of Matt and Ben.

The set for Oily Rag Theatre’s production is very simple in the small space of the Chapel theatre, but effectively portrays the very humble beginnings of the pair. Lighting by Josh Koster is cleverly done to highlight, in particular, the narrative moments and flashbacks.

In summary, this play is a really good night out. It is bizarre, creative and extremely funny and a great example of the rich talent we have in South Australia.