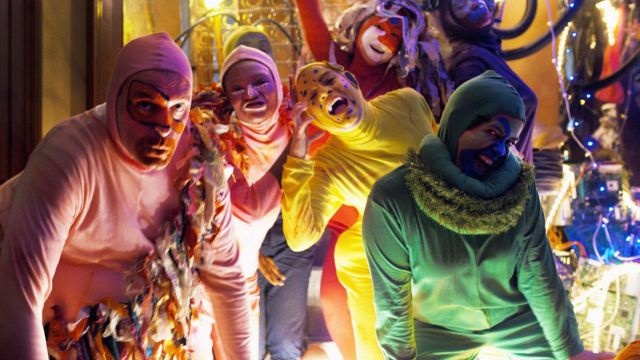 Greeted by a red morph suited woman with newspaper for hair and balloons for breasts, the audience were coerced into a 166 year old house in The Rocks for a theatrical experience like no other. Described by multiple audience members as resembling ‘Teletubbies on ice,’ this sensory overload hits closer to home regarding society’s issues than initially expected.

Like Me is a piece of immersive theatre representative of the desire to be liked in our increasingly lonely society driven by social media.

This message took its time to unfold, and each audience member would have made varying interpretations of the piece depending on the characters with whom they interacted in ‘The Clinic.’ The audience were given license to freely explore the multilevelled, eight roomed house; much akin to the way we experience the internet. I personally took part in a ‘sadness selfie’ and witnessed a fellow audience member stroke ‘Dick Pick Rick’s  oversized, rainbow genitalia (much to his delight). Presented in LeCoq’s Bouffon performance style (based on clownish mockery and the ridiculous), these contemporary issues were exaggerated to the point of being humorous, until the hard hitting message of each joke was revealed.

The tension was at its peak in my personal journey when I witnessed an audience member forced to strip down to his underwear in the shower room. In this moment, the character’s intentions became far more sinister, and the line between audience member and participant/performer were so blurred that it felt invasive to watch. You couldn’t reassure yourself that it wasn’t real, as is possible in more conventional theatre. You couldn’t even reassure yourself that you wouldn’t be the one forced to strip next.

The characters were cohesive in style in terms of nonsense speech, movement and desires. Yet each characterisation was uniquely crafted. This was aided by Alex PF Jackson’s costume design, which gave each character a district colour and exaggerated their most highly sought after physical features, alluding to the increasing focus on the superficial. We don’t just have to watch out catching our reflection in the mirror, but multiple times a day via our laptops and phone screens. Heaven forbid that we’re tagged in an unflattering photo on Facebook that hasn’t utilised our best angles.

If you’re looking to stretch your legs and move out of the passive role of a typical audience member, go see Like Me. Maybe you’ll stretch your ideas while you’re at it #likeforalike ?