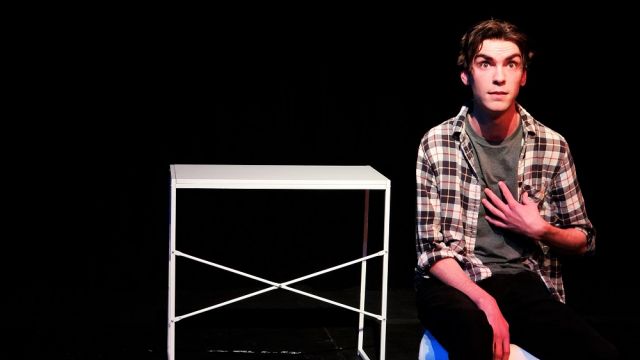 Melbourne Writers’ Theatre continues to impress with another engaging series of monologues, The Melbourne Monologues. Like The St Kilda Stories it is also a series of six short stories that are directed with care and sensitivity by Elizabeth Walley.

Firstly through ‘To Understand’ we are taken into the confidence of a person who has been very affected by a death and the experience of watching blood seep out of a human body.   This initially ambiguous and yet fascinating work is written by Katie Lee and performed by a very convincing Ruth Katerelos.  I imagine, as this work grows through being performed, it will gain in nuance through the use of pauses and variations in tempo.  Never the less it is a thoroughly absorbing piece.

Carmen Saarelant has written a great little parody called ‘No Feet’, a funny and disturbing work that touches on subjects such as phantom limbs and gender reassignment as well as delusional thinking.  Alec Gilbert performs this piece with appropriate commitment and irony. Most affecting and funny is Adele Shelly’s piece ‘Girl’s School Delights’, in which four teenage schoolgirls discuss each other’s talents and converse with a teacher who comes off very badly.   Cosmina Gilbert plays all four girls – A, B, C and D - through whom many of the considerable irritations endured by today’s secondary school teachers are conveyed.  The writing is astute and sharp and Ms. Gilbert’s performance most impressive.

The very prolific Bruce Shearer has written a piece called ‘Garry’, in which Jack McGorlick expresses his contempt for Tuesday.  Though I am assuming the day of the week changes in accordance to the actual day of the week at the time of performance.  This work is unexpected and both ridiculous and funny, and at times, very telling.

‘The Bystander is the Gatekeeper’, by Anita Saunders, performed by a charming and personable Karissa Taylor, could do with a bit of dramaturgy.  It takes extra concentration to interpret and ultimately does not make complete sense.  This leaves me wondering if the writer, performer and director are all completely in sync or if the writing is not yet fully resolved.

Finally Celia Handscombe brings to life a marvelously moving piece of writing by the adroit Louise Baxter called ‘Fairy Dust’.  This is a rich and complex work of the lived experience of the type of grief that is caused by the injustice of a premature death.  It is very telling

A fresh and vital evening – well worth attending.