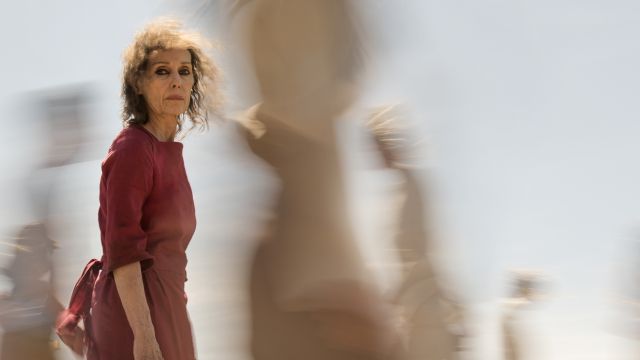 Homer’s epic 2,800 year old poem Iliad describes a few weeks in the final year of the siege against the city of Troy, in particular the quarrel between King Agamemnon and Achilles.  In Memorial: An excavation of the Iliad, published in 2011, author Alice Oswald set out to translate the Iliad’s atmosphere, it’s ‘enargeia’ rather than its story. In doing so she has stripped the Iliad of its narrative and drawn forth the biographies and brutal killings of the 215 soldiers Homer named.

Oswald has created a counterpoint by peppering the text with similes from the pastoral lyric.  In placing the brutal descriptions of death alongside the lyrical beauty of the similes she draws the listener into the action.  Oswald describes the Iliad as being both vocative and invocative, and as such, has always maintained that Memorial is a work to be read aloud in the Greek tradition of lament poetry.

Five years ago, Chris Drummond, Artistic Director of Brink Productions, came across a copy of Memorial in London and felt compelled to bring the epic tale to the stage. His vision was to bring those 215 dead soldiers back to life through a large-scale production in the tradition of an oratorio. And there he has succeeded. 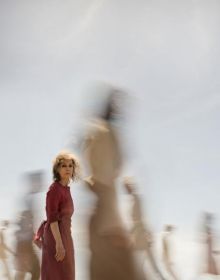 As the lights come up on a stage of undulating forms we are presented with a field of bodies as far as the eye can see. And then, almost as an apparition may appear, she is amongst them, a celestial being calling them back from the dead. Helen Morse is a powerhouse in this role and shows great grit and endurance, for she alone is tasked with the recitation of Oswald’s words.

And recite she does, with great poise, great equanimity, almost detachment. She does not pass judgement, makes no condemnations and names no heroes.  A picture of each soldier’s life is painted and then torn down with the gory details of his death. The intervals of similes give a moment for reflection and are often moments of immense beauty.

Upstage, high above, sit the musicians and singers, looking down like angels on the carnage and sorrow below. Drummond commissioned award-winning British composer Jocelyn Pook to write the score for Memorial and she has delivered a beautifully atmospheric piece which heightens the beauty of the text. Jonathan Peter Kenny, Kelly McCusker, Siobhan Owen and Melanie Pappenheim bring the charm and contemplation of the similes to life through song. The musicians are extraordinary and the Bulgarian and Macedonian singing simply spine-tingling.

As the soldiers’ names are called, their lives and deaths laid bare, the 215 strong “soldier chorus” moves silently around Michael Hankin’s Elysian Fields set. Yaron Lifschitz must be commended for achieving the unhindered movement of so many people around the relatively small Playhouse stage. At times though the constant movement takes the attention away from Ms Morse and in doing so detracts from the barbarity and beauty of the words that should be the focal point.

Memorial is a stark reminder that warfare does not discriminate in its carnage; it affects all members of society, young and old, male and female. Those left behind, mourning lost love ones, are victims of brutality as much as those who are lost to them.

In this year, the Centennial Anniversary of Armistice, as well as a time of heightened world tension, Memorial reminds us of the importance of remembrance.

At the going down of the sun and in the morning, we will remember them.