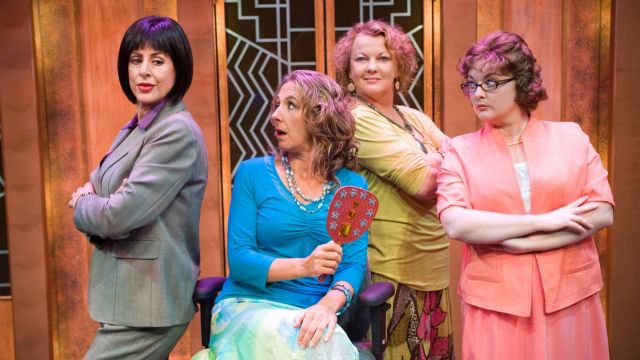 “Most women know intuitively that every other woman is experiencing memory loss, night sweats, or hot flushes, but when they are in a theatre with hundreds of women – not just a few sympathetic friends - and all are laughing and shouting “that’s me!” then they know what they are experiencing is normal. They aren’t crazy. It becomes a sisterhood.” - Jeanie Linders, author of Menopause: The Musical.

Linders’ statement rings especially true when you are a young male sitting in a theatre packed with women probably twice your age, all howling with sympathetic laughter at the experiences of the four women on the stage. And what better way to celebrate a very personal topic than through a show that makes light of the more challenging aspects of ‘The Change’ set to popular tunes from the ladies’ lives?
All of the performers worked extremely well with highlights including all of Michelle Collins’ work as Earth Mother and Andrea Creighton’s hilarious air drums and rendition of “My Thighs” (an adaptation of “My Guy”).
Musically, I was disappointed. From the opening bars of the overture it was obvious that the entire score had been generated electronically using General MIDI samples. Don’t get me wrong, there are some amazing sample packs on the market that can hardly be distinguished from real instruments, but these were the stock-standard free samples that come with most music sequencing programs. You can find vastly improved karaoke tracks to nearly all of these songs on iTunes for $1.19 (although there is an obvious issue with public performance of copyright masters) and you would think, with the popularity of the show and the enormity of its touring schedule, that it would make sense to throw a bit of cash at some studio musicians to create top quality recordings to really bring the whole show up a couple of notches.
Although not directly related to the show, I did find the product placement a bit off-putting. There were Tena® banners in the foyer, gobos on the theatre walls, and boxes of pads on the stage. Remifemin® holds the centre advertising spread in the programme and one of the cast even cries “Feel free to laugh!®” at one point during the show. On top of that, every seat in the theatre had a free copy of Curves magazine, including a free subscription offer for all audience members – as long as they ticked a box that, after taking all of their contact details, asked whether they were already a member of a Curves Health Club. I understand that women over 50 are a hard market to target, but it did feel like a bit of overkill, even for a mid-twenties male.
Ian Nisbet