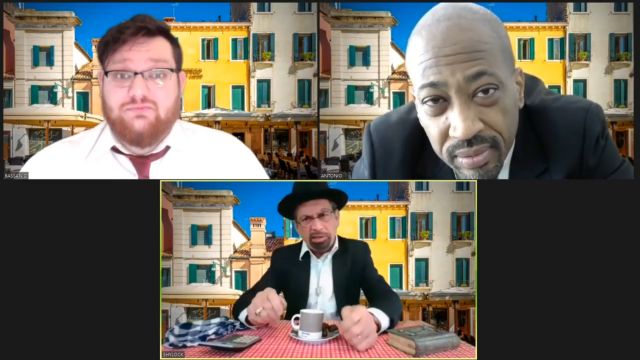 One of these is Streamed Shakespeare, founded five months ago to give “performing arts professionals much needed opportunities in a suddenly dark world of cancelled contracts, dwindling savings and career chaos” (Artistic Director Holly Champion). By August they had become a group of one hundred creative artists in an online theatre company that reached beyond Australia. They are now creating fully rehearsed ticketed productions. The first of these, The Merchant of Venice, aired from 21-23 August. A skilled production team, led by director Roslyn Hick and technical director Thomas G. Burt, take sixteen actors to a virtual contemporary Italy via the skilled video editing of David Castle. Incredible organisation is involved in such a production. Think “zoom” with a team of dedicated, patient actors and directors, backed by a “whizz bang” technical team, who are just as dedicated and patient.

The result is a very different form of ‘live’ theatre, playing to a much ‘distanced’ audience that watches Shylock and Antonio arrange their strange business deal across streamed screens in ‘home theatres’. The absurdity of their agreement is just as improbable. The racism it exposes – and unfortunately condones – is just as disturbing. Through careful direction and skilled editing, the cast take their audience into a world of business, family dysfunction, romance and prejudice that could sound a tiny bit familiar.

For actors, this new theatrical genre requires a re-adjustment of movement and expression. They need to be contained, restrained, yet still portray the varied emotions and reactions of the characters. They need to be constantly aware of proximity to the screen, lest features be distorted, and intentions lost. They need to appear to be listening to a fellow actor speaking in a totally different frame. Geoff Sirmai, as Shylock, is very aware of all of this, and uses both his stage and film experience to good effect on this new small screen. Sirmai’s Shylock has a very “lean and hungry look”. I know, wrong play, but Sirmai finds both the wiriness and grasping determination needed by a man struggling to sustain his place in a bigoted, mercenary society, epitomised by businessmen such as the cool, unfazed Antonio played by Haki Pepo Olu Crisden, who is confident of risking a ‘pound of flesh’ bond for his needy friend Bassanio (Jamie Collette).

Collette uses the small space allowed by the screen effectively to create a character that listens carefully and reacts accordingly, whether supporting his benefactor – or courting his Paduan prize, the discerning Portia, played by Jess Loudon. Both react believably across their screens, Loudon more effectively in her restrained but entirely contained delivery of the courtroom scene.

Both Holly Champion (Nerissa) and Adriane White (Gratiano) skilfully pare their acting to infuse their characters with both emotion and humour. Shakespeare uses these two characters to bridge the social barriers, and both performers find the complexities written into the roles despite being contained to a small screen and restricted responses. It being Shakespeare, there are many other characters – hence a great choice for involving more actors – and these are enthusiastically played by Jacqui Greenfield, Samantha Winsor, Jim Southwell, Chiara Charlotte Osborn, Kim Jones, Susan Jordan Meredith O’Reilly, Abdeed Razzouk and Jessie Trompp. All bring eager energy to their characters, some doubling and even tripling their roles.

It may take some a little while to adjust to this new genre – but innovation seems to be more important than ever if we are determined to combat the theatre-less effect of this pervasive virus – and the too apparent lack of sympathy or empathy with the arts. Fortunately, innovation and the arts have always gone hand in hand, and Streamed Shakespeare is as determined as Shylock, as innovative as Portia.

Keep in contact with what they are planning atwww.streamedshakespeare.com