The Merchants of Bollywood. 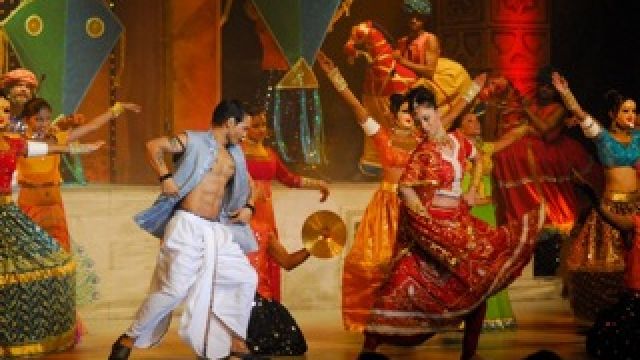 India's Bollywood film industry, we are told at least twice during The Merchants of Bollywood, is responsible for over 800 films a year and 15 million tickets sold in a day … which is all very well and good. Astonishing, in fact, as statistics go. Unfortunately, even with these overwhelming data behind it, this quintessentially cinematic phenomenon doesn't necessarily make for great theatre.

A curious mixture of spectacle, acrobatics, rock eisteddfod, Mardi Gras, Mamma Mia!, Grease and theatre, The Merchants of Bollywood suffers enormously from being shoe-horned into the Queen of Proscenium Arch venues – Melbourne's State Theatre – where we are robbed, at point-blank range, of every possibility to engage. Instead, like lemmings, we just squirm in our seats as the high-octane cast make increasingly desperate and, sadly, ultimately pointless efforts to get us on to our feet and into the spirit. If I had stood up to dance, I would have kneed the person in front of me in the back of the head – not to mention the damage I would have done to my knees, shins and the pairs of feet either side of me. And as for those side aisles? They're barely wide enough to walk along, let alone dance in. There is no centre aisle either (unlike Sydney's State Theatre where the show will land in March), into which those audience members who felt compelled, could deliriously spill.

While the large, exuberant cast exude enormous amounts of energy and skill, the choreographic style just doesn't have enough variation early on to match either the skillful dancers' passion for it, or reward us for our attention to it. Yes, the costumes are lovely (and there are lots and lots and lots of them), but the first act becomes incredibly repetitive, as one Bollywood-inspired dance extravaganza after another fills the stage with colour and movement. The exception is the marvellous split-stage (screen) sequence in which the ambitious Ayesha (the fabulous Carol Furtado) recalls the initial, portentous confrontation with her traditionalist father Shantilal (Chander Khanna). In this compelling sequence, the young Ayesha is acted and danced by her remembered younger self, but voiced downstage in a spotlight by the, now, adult Ayehsa. But even with this glimpse of pure theatrical instinct and potential, by interval the show had amassed all the theatrical torque of a seemingly never-ending episode of India's Got Talent.

The second act, relievedly, is a different matter altogether; as the story of a dance dynasty collapsing under the weight of conflict between the ageing, alcoholic Shantilal and Ayesha's dreams of creative independence, takes centre stage. It is the second act, too, that delivers the cultural highlight of the night: a beautiful wedding scene (faintly reminiscent of Mira Nair's sensational 2001 film Monsoon Wedding). Here, the production finally comes resplendently into its own, courtesy of some beautifully observed traditional dancing and costuming, colourful kites, masks and ornate, prancing 'horses'. It also heralds the welcome arrival of the Spinning Drummers of Serendip, who provide a rare and exquisite glimpse into the true cultural significance with which the production may have resonated.

At the end of the night, only one dilemma remains. Indian dance, we are informed, is based on the rhythms of nature. But in the final number, when the traditional dance styles and costumes have merged with Ayesha's MTV-inspired disco/techno grooves, not only does it seem an incredibly uncomfortable fit, but it also suggests that in her effort to embrace her destiny as a modern choreographer, she has actually embraced typically Western, empty-hearted, empty-headed and soulless, showbiz pizazz. And in doing so, she appears to have lost sight of the value of true creative purpose and meaning – which supports, a little too precisely, the depth and passion of her father's clearly articulated fears for her.

Somehow, I don't think that's what was intended.