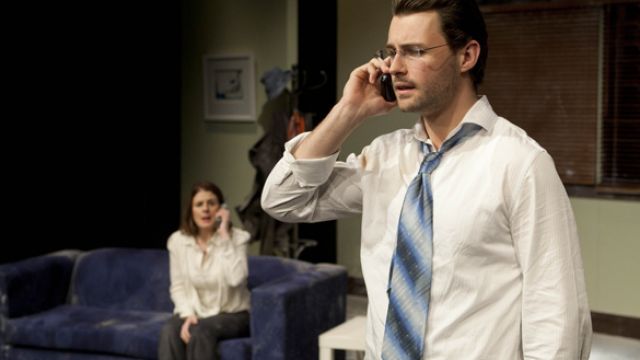 The biblical Mercy Seat rests on the Ark of the Covenant and is connected to the atonement rituals of Yom Kippur. Nick Cave’s song The Mercy Seat also calls for forgiveness – and it is the words of this song that echo eerily in the final moments of Neil La Bute’s play at the Sidetrack Theatre:  and in a way I’m yearning to be done with all this measuring of truth …

This is an exceptional production of a very tight, carefully constructed play. It is set in a dust covered  apartment in New York on the day following the destruction of the Twin Towers. Ben Harcourt (Chris Rodgers) and his lover – and boss – Abby Prescott (Jo Little) are considering using the horrific situation to compound the deception of their affair. Will Ben let his wife and young family know that he is alive? Or will he and Abby take this chance to create a new life for themselves? It is typical of La Bute’s work that he is able to takes the audience through their harrowing  dilemma in a script that has such an economy of words yet such a range of emotions. They argue; they accuse; they reminisce; they deny. And – as in his other works – La Bute leads us through the strain of their relationship with dialogue that is natural, and real, and very New York.

Andrew Doyle’s direction is what makes the production exceptional. It is as tight and controlled as the script. He shows a real affinity with La Bute; an ability to emphasise the dialogue with direction that pulls the characters apart then throws them together mercilessly. He uses the wide space of the Sidetrack stage and the minimal set to create emotional distance between the actors.  Yet they seem also to have a gravitational pull across the space that keeps them hovering toward and around each other – just as the burning issue of the sin they are contemplating hovers between them.

Rodgers and Little work carefully under Doyle’s direction. Rodgers’ Harcourt is fraught. Haunted by the cell phone that keeps ringing as his family call and call, not knowing whether he is alive or lost in the disaster, he is alternatively nervous and confronting, weak and angry. He epitomises the weak opportunism of the marital cheat. Jo Little’s is outstanding as Abby. She moves and speaks with taught, controlled energy. Through minimal gestures – a thrust of the chin; a straightening of the shoulder; a fixed stare – the internal turmoil of the character is clear and compelling – and real. There is total suspension of disbelief. She is Abby.

Claire Maloney’s set is also real. The simplicity of the dust settled over minimalist furnishings on the wide stage adds to the tension, giving Doyle the space to manipulate his actors back and forth through arguments and impossible solutions. And all the while the burning city skyscape hovers outside the window, with Jodi Speight’s lighting bringing it constantly clearer.

This is a very carefully wrought, creative production of an exceptionally well wrought play. Doyle and his cast and crew should be justly proud of what they have achieved.