Of Mice and Men by John Steinbeck. 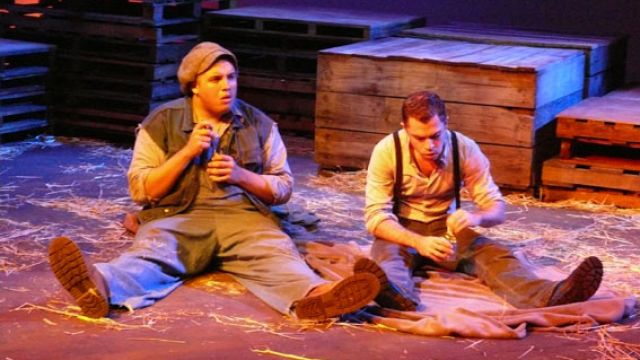 Lennie, George and ‘Curley’s Wife,’ the dreamers of John Steinbeck’s Of Mice and Men, are outcasts in bleak, brutal Great Depression America.
Adapted from the dark humanity of Steinbeck’s novella, Of Mice and Men makes a fairly grim piece of theatre too. But given strong central performances, and Judith Bedard’s penetrating direction, it also makes for moving, powerful theatre
Two itinerant farm workers share a dream of their own small farm. The savvy George protects the physically strong but simple-minded Lennie, whose desire to stroke soft things has resulted in them being on the run.
Employed at a new farm, they cross paths with 'Curley’s Wife,' a young woman with Hollywood dreams – when Lennie strokes her soft hair, everyone’s dreams unravel.
Andy Madden’s George is effectively savvy, Cheyne Fynn is absolutely believable and truthful as the simple Lennie, and the chemistry between the two propels the drama strongly throughout. As 'Curley’s Wife,' Katherine Shearer is combines the flirtatious, coy and vulnerable seamlessly.
As Candy, the aging farmhand who wants to share George and Lennie’s dream, Donny Muntz is a faltering, credible character with whom we can empathise. Adam Dunn’s Slim effectively embodies the upright figure of respect in Steinbeck’s writing.
Foreboding, established at the outset and never far from the surface, is realised chillingly in the scene where Lennie inadvertently kills 'Curley’s Wife.' It’s a convincing, tightly staged moment.
Stacked timber palettes suggest the play’s various locations, creating effective levels and necessary masking, were complemented by other found timber items and constructions – a cable spool, benches and a single, bare jagged tree, crafted from off-cuts. Straw, strewn across the floor, completes the Spartan rural ambience. John Harrison’s balance of lanterns and atmospheric stage lighting is particularly effective.
Transitions are very effectively handled when the music is live and unaccompanied, featuring the rich spiritual singing of Wayne McDaniel, who also creates a strong impression as the negro farm worker and shadowy observer Crooks. Recorded music used at other times was less inspired.
Faltering accents mar some of the supporting performances, but are relatively brief distractions.
A worthwhile evening if you like your theatre dark and brooding.
Neil Litchfield