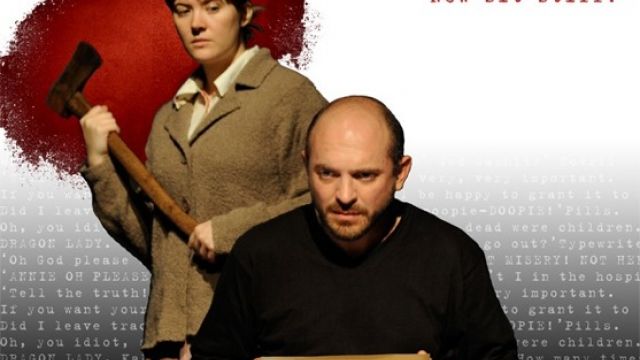 Adapted from the Stephen King novel of the same name, this incredibly difficult two-hander play has been courageously produced in the Bakehouse Theatre by Peter Green, under the direction of Michael Allen. Cast in the two roles, Joanne Hartstone as Annie Wilkes and John Maurice as writer Paul Sheldon do an outstanding job.

The story centres on writer Paul Sheldon after a car accident, when he is rescued by self-confessed ‘Number One Fan’ Annie Wilkes and rehabilitated in her home. It is soon revealed that Wilkes is in fact a psychopath and the ill treatment, abuse and eventual mutilation suffered by Sheldon forms the basis for the rest of the play.

In the lead role of Sheldon, John Maurice delivers a measured, balanced and wonderfully structured performance. He finds the light and shade in the text and is captivating to watch. It felt, however, that the heightened level of urgency necessary to escape Wilkes’ home is not always reached. This was the result of a combination of factors including, but not limited to, the occasionally unclear intentions of his tormentor. Hartstone was incredibly focused in her role, and made wonderful use of her eyes and physicality. Her Wilkes was languid and gradually increased in her levels of violence, but the light and shade in the characterisation felt mismanaged and contributed to the awkwardness of Sheldon’s flight attempts. It was sometimes difficult to buy Sheldon’s obedience and submissiveness, and early on in the piece, when Hartstone first showed us Wilkes’ psychotic side, either she went too far – or Maurice didn’t go far enough. For me it didn’t initially gel. The second act absolutely soared. The characters felt much more connected in the players’ actions and Harstone’s extra sexual dimension to Wilkes took the psychopathic to a new level.  It is frustrating that there was this niggling misconnection early on. The production is so close to being perfectly played that this could easily be forgiven if it wasn’t so important to the success of the thriller genre. I wanted to be on the edge of my seat. I wanted to be itching to see Sheldon get to the door before Wilkes arrived home. But for those reasons, I didn’t always believe that Sheldon really wanted to go as far as King had intended.

Set and costume design by Tammy Boden was excellent and the definitive spaces made for great wheelchair action to conflict with Sheldon’s escape attempts. The space sits naturally on the stage and the distance across the set is believable. Harstone should be careful not to overplay her shouting across the space in this instance, as it is clearly not as far as she occasionally acted it out to be.

Ben Fleet on lighting and sound design has excelled. The soundscape was always effective in heightening tension and never intrusive or self-aware. Lighting was also excellent and manipulated the stage in the same way Wilkes was manipulating her captive, drawing a nice parallel.

This is an excellent production, and both players have done a very good job. Hollywood spends a lot of time and money creating the effects which tap into our fears and make thrillers successful. On stage this is a monumental task and Bakehouse Theatre Company has created a commendable production. This play is a masterful adaptation by Simon Moore from the novel Misery by Stephen King. Misery, melancholia and madness made this a memorable drama of psychological intrigue.

Joanne Hartstone as the captor Annie Wilkes provided an outstanding performance.  Annie claimed have been a nurse, whose unlikely graduation entailed a trail of gruesome deaths.

A handful of patrons found Annie’s mental illness confronting or adverse to community efforts to eliminate fear of mental illness.  They momentarily forgot that this character had murdered her own mother and Annie profiled as a psychopath with a purpose to kill.

John Maurice as the captured author Paul Sheldon, supplied stoicism and hallowed humour to appease his agony and manage the audience’s empathy.  Desperately he tried to hatch an escape plan with pathetic obstacles.  He pleaded against Annie’s demands for a chapter a day that delivered him closer to a literal deadline.  He massaged her ego for her one good idea to no avail.  Annie’s perception of unholy literary work promoted her rage and his punishment.

The sound design by Ben Flett was thrilling and full of suspense.  When Paul violently triumphed over Annie, we heard and saw murder until the audiencere-orientated with relief.