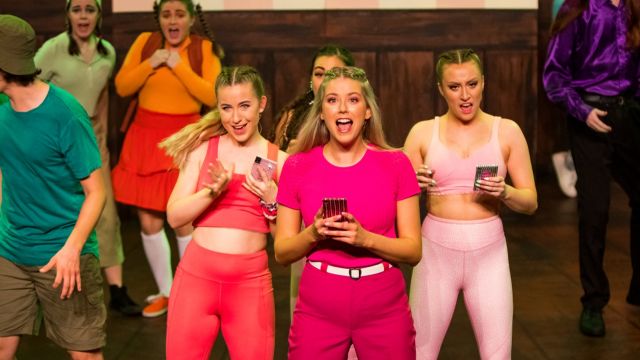 My first visit to the Harvest Rain Theatre was very productive, with such an exciting crop of talent on display as they reaped the benefits of their lessons there. This is a completely original production from the writing and composition to the staging. The stage is an open space on the floor, which meant the many dancers could launch into the routines with freedom and liberty – and they did. Set in a School of Arts, retired performer Eglentine Fitzgerald runs this ratbag collection of students as they pursue their dreams, fight over costumes, fall in and out of love and aim for a Broadway audition. This offered a wide scope for acting, singing and dance which were covered in all aspects in this production. Director Tim O’Connor should have known exactly how to interpret the play as he also wrote the book and lyrics. That helps to explain why everything worked so well. For the most part, the pace was maintained as there were very few costume changes and the open stage allowed for free movement. Claire Sutton as Miss Fitz was very good, while Laine Loxlea-Danann caused a sensation when she arrived as Bernadette Peanut. Don’t you just love the names? Kurt Myhill and Cristian Robba-Colley stood out in their roles. Oh, I did like the piano player. Well done on the whole to everyone involved but a little more subtlety at times, particularly in delivery of the spoken word, would have enhanced the over-all effect.

Well done by these students playing students. A good future lies ahead.