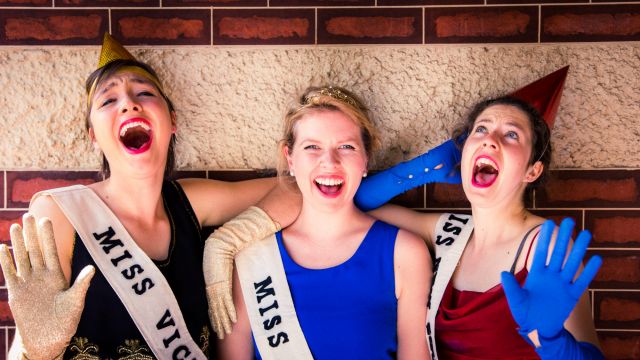 Miss Westralia - The Beryl Mills Story is a new musical based on the very first Miss Australia, a 19 year old from Geraldton, and her trip to the United States with competition sponsor Frank Packer.

Balloon Head Theatre’s production features a collaborative script with music and lyrics by Jake Nielson, music by Matthew Predny, book by (actors) Madeline Clouston, Ameliia Bourke and Noemie Huttner-Koros and dramaturgy by Ariella Stolan. A great concept, the story is a good one, and the songs well structured.

Madeline Clouston is lovely in the title role, convincing as the girl who wants to speak her own mind, Noemie Huttner-Koros is a lot of fun as Miss USA Norma Smallwood, while Amelia Burke very nicely plays both Beryl and Norma’s mothers. Musical director John Mondelo (wearing nice ties) pulls double duty, accompanying the show on keys and playing Frank Packer.

Highlights include the pageant recreation and Beryl’s trio with her older and younger self (great videography by Benjamin Goegler). The use of red, white and blue suitcases (even if they are of the wrong era) to create sets, is very effective.

The singing isn’t always perfect, but this doesn’t diminish the enjoyment of the show, and accents -  especially the broad Australian - are used to effect.
A charming look at a little remembered piece of Australian history. Miss Westralia is a lovely new little Aussie musical with as much charm as Beryl Mills herself. Well worth checking out if you can get tickets in this very short run.