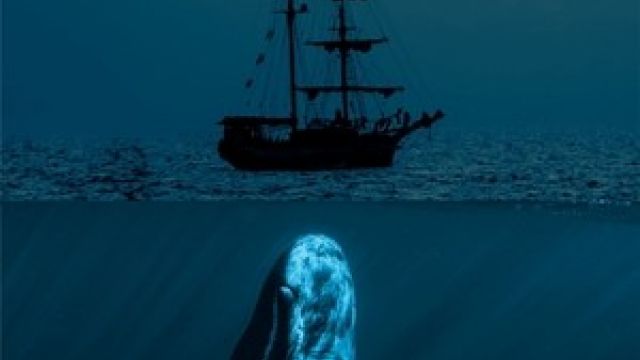 “Call me Ishmael,” booms Ross Ericson, projecting his voice to every corner of the Bakehouse Studio, narrating the story of the hunt for the infamous whale. Ericson has condensed the 135 chapters of the great American novel into an hour-long monologue.

Punctuated by sea-shanty music, Ericson takes us through the characters of the whaling ship Pequod: the dominating Captain Ahab, the harpooner Queequeg that shares Ishmael’s bed in the ship’s cramped quarters – and the White Whale itself: Moby Dick. Then we’re on the hunt for the whale, the excitement evident in Ericson’s superb voice.

It’s the bicentennial of Herman Melville’s birth and whilst the concept of whaling seems abhorrent today, there is still interest in the sinister, the thrill of the chase and the single-minded vengeance sought by Ahab. Ericson evokes those emotions and more with barely a pause between scenes: he brings the voyage to life to get a sense of Ishmael’s evolution from observer to participant and the growing terror of the enemy – whether that’s the whale or the captain!

The staging is simple – a sail, a couple of wooden crates, a storm lantern and a pewter mug of something (rum?) to soothe Ericson’s voice. The lighting aids the narrative and the subtle sounds of the sea add atmosphere to the already captivating story telling.

It’s an old-fashioned idea to sit and listen to one person talking for an hour, so this might not appeal to all audiences, but Ericson’s passionate monologue is a wonderful introduction to a novel that many know of, but few have read-and after experiencing this, you will join the readers.