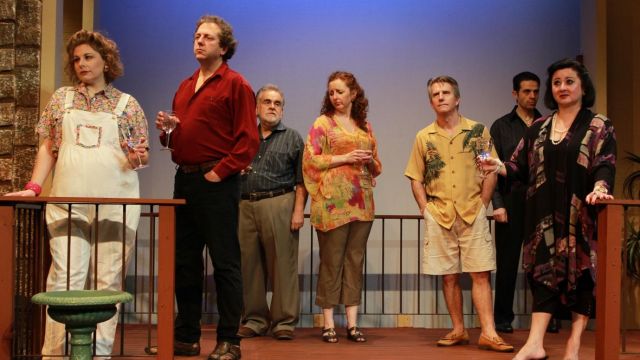 Critical appraisals of David Williamson’s work often infer that the messages are ephemeral, the one-liners forgettable, the characters one dimensional.  Well, it is twenty years since he wrote Money and Friends, yet the underlying messages – both social and fiscal – still ring remarkably true and translate relatively well to a twenty first century setting. People are just as ambitious, just as greedy, just as gullible and just as vulnerable. Money still dominates, and, unfortunately, still causes rifts between families and friends.

As with all of Williamson’s social comment plays, the characters are easily recognisable and the dialogue short, pithy and pacy. And in this play, the setting – the decks of beachside holiday houses – can be as complicated or as stylistic as the stage space, the imagination of the designer and the budget  allow.

So it is no wonder that the play is such a favourite of community theatre companies.

In this production, the set is realistic, and this causes some problems for the action. A deck area is set upstage on rostra, with steps leading downstage to a wider acting area. This means that the deck space is restricted, and, as most of the scenes occur here, it becomes very crowded in scenes where all nine actors are crammed into the space, giving way to a little masking and the inevitable straight line rather than natural groupings. 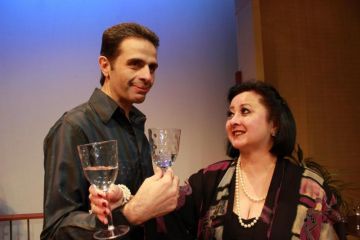 The action occurs over a series of ‘deck parties’, at various times of the day, yet the blue backdrop, hard on the deck, does not vary, though many changes of costume indicate day or evening ‘get-togethers’.

This being said, some of the actors do a great job with their characters. As Margaret, Shane Bates carries the action. It is her character who sets the scene for the audience in an introductory soliloquy, and breaks through the fourth wall throughout the play to comment on events.  Though a little hesitant with some lines (as often happens on opening nights!), she is confident in her characterisation and command of the stage, and in her relationship with the other characters, especially Peter, her recently widowed neighbour.

Rob White plays Peter with a very natural and easy style. He appears very comfortable on the stage and in the character. His Peter is affable, kind, easily led and almost comically vulnerable. He listens to everyone, trusts everyone – and as such is Williamson’s vehicle for the play’s inevitable conflict, climax and anticlimaxes.

Of the other cast members, all of whom make the most of the humour in the dialogue, Marty O’Neill’s expressive portrayal of Stephen, the miserly, pessimistic  surgeon with property investments, is very strong, very physical and comically believable. He and Melanie Robinson, who plays his long suffering, yet kind and pleasant wife, Penny, find the right humorous phrasing in the dialogue, and deliver it well. 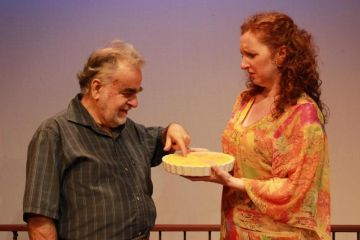 Leah White and George Trppis play the social climbers Vicki and Alex, constantly trying to impress. Andrew Robjohns, playing the environmentalist television journalist Conrad is ‘big’ and bombastic but probably unnecessarily loud in this small theatre. As his pregnant wife, Jacquie, Gemma Munro is suitably preoccupied and dismissive in the few lines her character is given.

Justin Hurley, as Conrad’s son by his first of three marriages, and Margarets’ unlikely lover, Justin Hurley does not appear comfortable in the role, his constant jerky head movement and hand gestures suggesting the need for a little more direction and experience.

This is director Peter Lavelle’s first major production and it was wise to choose a play that speaks as much for itself as this play does. The dialogue, the complications of the action and the humour carry the play, and as long as the characters of Margaret and Peter are carefully portrayed so as to draw the other characters together, the play’s messages will be tellingly funny – and satirical.