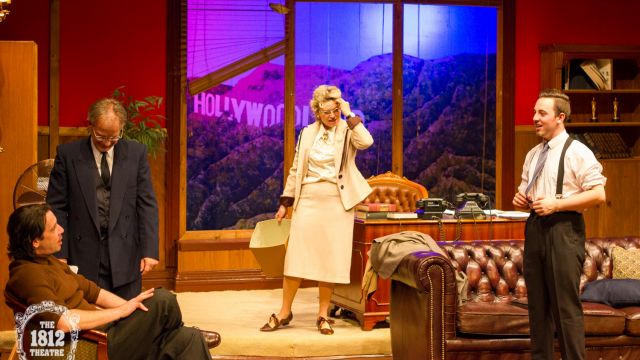 There can’t be anyone who doesn’t know of the blockbuster movie “Gone With The Wind”, particularly among theatre-lovers. 1812 ends its 2015 season with a blockbuster production of its own. Ron Hutchison’s play is a farce – and the events it is based on (in Ben Hecht’s autobiography) are farcical in themselves. Hecht was a legendary screenwriter of the 30s, 40s, and 50s….the Golden Age of Hollywood. When David O. Selznick…producer of GWTW, in danger of going broke… called script doctor Hecht and seconded Director Victor Fleming into his office, it was to lock the door and hold them hostage, fed only on bananas (nutrition and vitamins) and peanuts (energy) for five days while they wrote a new script for the film, which had foundered. Hecht actually claims that this was the origin of the phrase “Working for Peanuts” but it’s not true. Selznick and Fleming are forced to play all the characters while Hecht feverishly tries to get a shape and structure on the story. What follows is hilarious entertainment, but it could have been a disaster in less capable hands.

Skilled director Loretta Bishop has a marvellous cast of four highly talented actors who (mostly) avoid going too far over the top. They play the comic business for the truth, without un-necessary mugging for the audience; yet they manage to nail every laugh, as well as the more pointed and serious references to racism and sexism. Tim Byron is superb as Selznick, completely convincing as the producer who has his future on the line, and is determined not to be beaten. We see a lot of caricatures of Hollywood Producers of a certain era, but Byron avoids all the clichés. He makes Selznick real and believable, and truly lets loose only when impersonating Scarlett O’Hara or Butterfly McQueen (“I don’t know nothing ‘bout birthing babies Miss Scarlett.”).  Brett Hyland’s Hecht is very like the actual man, slapdash yet driven…. he hasn’t even read the book and has to be told the story as he’s writing the script. Hyland brings real authority to the role and has some delicious lines about the role of the script writer which really resonated with this particular writer. He also has real presence on the stage, and great timing, necessary to counter the acting chops of Mr Byron. These two superb actors are complemented by Kirby Chenhall as Victor Fleming. Though far too young to play Fleming (who was 50 at the time) Chenhall brings the right degree of arrogance and self-assurance to the role, plus some delicious comic touches. He has come up through the ranks of 1812’s Centrestage Youth Theatre and is definitely an actor to watch in the future. Wendy McCrae is often hilarious as Selznick’s hapless assistant, though she teeters on the OTT tightrope and can sometimes sound too shrill. Nevertheless she’s adorable and an added extra to the comedy business.

Robin Miller’s gorgeous set was of exceptional standard and would put many main stage designs to shame. Robin LeBlond gave us a practical but effective and well-executed lighting plot but sound does need a rethink….especially through the intercom.

To cap off the very entertaining evening there is always 1812’s legendary supper….with finger food and Bubbles. A perfect night out.