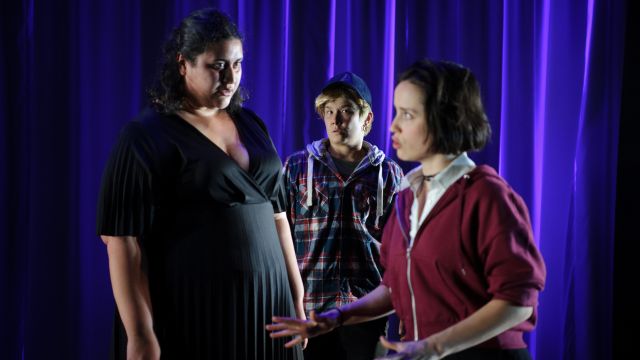 Waiting at the tram stop after a performance of Moral Panic, I overheard a young woman say excitedly to a friend, ‘Did you see that?  It just got to me on so many levels!’  I agree.  Moral Panic may not make ‘sense’ in terms of the logic the playwright and director Bridget Balodis wish to eschew, but the play does ‘get to you on so many levels’.  There are passages where I struggled to get the literal meaning of what was happening on stage, but something – a line, an image, a suggested emotion – keeps getting to you, tugging at your emotions, pulling up buried things that are suddenly recognised.

After a vituperative speech from the town of Sweetwood’s Mayor (Chanelle Macri) – so loaded with patriarchal clichés and misogyny that he almost chokes on his hatred, the play begins as a sort of a game; the feel is of a sit-com akin to one of those television shows about teen witches.

Bickering buddies Evelyn (Eva Seymour) and Andy (Kai Bradley), arrive laden with not quite the right ingredients to assemble a deadly curse.  It’s near midnight – of course – and they’re in the sacred grove, the scene of the burning alive of many past witches.  They’ve been on the internet and got instructions from a long dead witch and Andy’s got an electronic Ouija board…  But soon, to Evie’s dismay, they are joined by her cousin, Sue Anne (Chanelle Macri again), who’s also the Mayor’s daughter – the resemblance is striking.  But later, Evie’s aunt, Callista (Jennifer Vuletic) arrives too – and more or less takes over.  Callista may or may not be a witch herself.  Indeed, witches – the very idea of witches and their powers and what they represent and why these powers have meant their continual persecution and attempted extirpation – are the central, fundamental crux of Moral Panic. 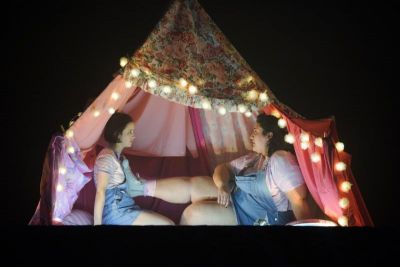 When the curse fails to fire, they must descend into what the program blurb calls ‘the nauseating dream logic of the underworld’ where ‘they must learn to speak the mother tongue… to listen to the crone and the crow… [where] calling on the almighty spectre of the Witch unleashes all that is terrifying and unknowable about queerness and womanhood.'

If that sounds somewhat overheated, it is, and I can’t really say that these claims are all realised on stage.  Nevertheless, the cast – inevitably dominated by Ms Vuletic – never wavers.  Ms Vuletic is, I must say, enjoying herself immensely.  Until the very end, she never relinquishes a sort of knowing, ironic but parental calm as if her Callista knows all in advance.  Ms Seymour, meanwhile, is a true chameleon.  It took me some time to recognise her, given all the widely different characters she’s inhabited.  Here she’s a prickly, whiney teen who will metamorphose into something quite different.  Kai Bradley does the sweet, goofy kid brought undone by proceedings very well and Ms Macri supplies a needed contrast in her initial ironic cynicism and then by the power of her presence.  There is no signalling to the audience that this is ‘funny’ (although it often is) and the ‘characters’ (such as they are) modulate and transform to become, if not witches then warriors for witches. Moral Panic is a risky enterprise: it teeters on the incoherent, there are connections that feel arbitrary, and passages almost wilfully opaque, but if you simply let it work on you, work on you it does – until it runs out of steam.  Director Bridget Balodis makes the boldest claims for the play in her program note.  Having decided that the (male) way of storytelling – ‘clean and very linear, where symbols stand for one thing, where tidiness reigns’ – is an ‘unsatisfactory reflection of [her] own inner self’, she wants instead ‘a storytelling that is deeply intuitive, political and about the body… [one that subverts] symbols and language.’  It’s also about ‘prioritising emotion over action’ and ‘it does not want to explain but just to be, to live and die without the scaffolding of ancient systems’.

Reading that, I couldn’t help wondering if Ms Balodis had been faking her way through in all the excellent work she’s done on other productions, some at least held up by ‘the scaffolding of ancient systems’.  You might question too the characterisation of male storytelling with its implication that plays with a higher degree of claritycan’t by definition have the qualities she wants.  But these clearly sincere aims for a particular kind of storytelling may explain the play’s surface incoherence and perhaps why, rather than a climax or resolution, the play ends with a lengthy rant.  It’s superbly delivered by Ms Vuletic, but despite the power of the writing and the performance, it’s a rant all the same.  It’s highly literate, highfalutin agit-prop and it feels like a failure of nerve – or craft – at the end of a highly original play that does ‘get to you on so many levels.'