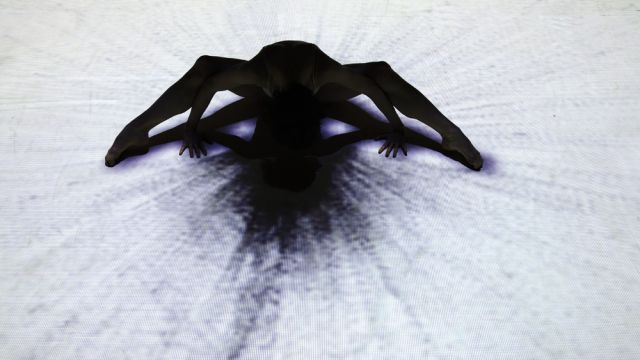 This piece of dance, multimedia and physical theatre uses the synergy of lighting, sound and video infused with movement, dance and performance.
Gideon Obarzanek has created a masterpiece by integrating the energies of both machines and mortals. Utilising modernity in the form of ‘computer art’ by interactive system designer, Frieder Weiss, lighting design from Damien Cooper and laser and sound from Robin Fox produces a work that is not only mesmerizing but hypnotic and remarkable.
This production opens with a severely raked white stage, almost like a blank canvas, which is then interactively exploited with the attack of bodies, lights, sound and images. Two portions of this raked stage have been constructed with the ability to fold out as two giant flaps to create a totally vertical wall that the performers can then stand and move against.
The performers move in clusters or duo formations and sometimes solo. Choreographically, the movement is mainly floor work with lots of ‘attack’ and strong, sometimes contorted movements. The performers appear like organisms, as if we could be looking at a giant swab in a lab. The miraculous effects are such that when a performer is planted on the space, they then move with this encasing light on and around them which moves with the motion of their bodies, like an ‘aura’ outline or a ‘body heat’ machine image.
The program states that Frieder Weiss is ‘the author of EyeCon and Kalypso, video motion sensing programs especially designed for use with dance, music and computer art.’
This has contributed to a truly remarkable work. The visual effect is like a moving/dancing piece of tie-dye artwork.
At times some of the sound pulses like a heart monitor or almost makes a static sound, the sound electricity might make. This production is like a cocktail, a fusion or synergy of bodies and biology mixed with technology. Some of the sound effects reverberate with such magnitude your head feels consumed by sound.
About half way through the piece there are some extremely fast computer images which flash in sequence on the blank space. This could make some people anxious if they have issues with strobe lighting. The images go from erratic and frenzied to slow and hypnotic. I felt like I was in a soothing trance, almost like staring at a screen saver.
There was a very effective pas de deux where two performers were positioned against the folded out vertical flap/wall, appearing to be stuck to it. Then they would execute fluid movements where they would lean away or dip forward and the sound effect was this incredible ‘peeling off’ noise, like they were stuck with glue, adhered to the structure and then peeling away from it.
The work concludes with an enormous green laser, the only colour in the production. This strong beaming light shoots out from above the white stage directly into the audience. There is a sound somewhat reminiscent of a hovering helicopter. Then a billowing haze of dry ice consumes the auditorium, as the laser fills the space we can see this amazing visual effect of the haze, which, through the green laser lighting makes us feel like we’re in the clouds. It’s spectacular, a visual outline of clouds through the light. The laser moves quickly, then slowly, and due to the green effect, the silhouette of the two performers stands in the light - we could almost feel like we’re in outer space.
This innovative, progressive, dynamic piece of theatre conjures up ideas of everything from atoms, chemistry, biology, disease, energy, body heat and organisms to science, technology, software, data and computers.
A magnificent work for audiences who want more.
Emma Bell (reviewed during Sydney Theatre season).

The wildly contrasting, and often conflicting, creative disciplines of dance, theatre, cinema, multimedia and visual art are almost impossible to wrangle into one cohesive whole; and if Chunky Move's ambitious Mortal Engine doesn't quite manage to triumph over the fourth wall, it's certainly not through want of trying. When it does work, it is truly something to behold: a spectacular fusion of forms to which we find ourselves connected – almost transcendentally – like our pulse. When it doesn't, it's never less than a fantastic experiment in dire need of a purpose; other than being one hell of a multimedia show loosely constructed from all sorts of technical wizardry, powered by Ben Frost's magnificently formidable soundscape and interrupted by occasional choreographic flourishes.

A large white screen lies at an almost impossible (to dance on, anyway) angle on the stage … as though a cinema screen has been tilted to a thirty-something degree angle from the floor. It's an intoxicating prospect; and the first thought is something along the lines of "how are the dancers going to dance on that thing?" But with striking power, strength, precision and startling elasticity, they do. The extremes that these faultless bodies cannot reach are flawlessly assumed by the stunning projected multimedia elements on, and practically through the screen, that create a trance-inducing, kaleidoscopic surface that explores the world of shadows, shapes, metaphysical extensions of touch and, at times, quite miraculously, the dancers' very souls. It is finger-tip exactedness; and only the very few moments when the dancers are lit by traditional spotlights from above, are the tender, uncomplicated gestures of rare, poignant intimacy.

Mortal Engine, however, also continues the increasingly exhaustible trend of contemporary dance projects relying on the visual dynamics and vocabulary of multimedia. Meryl Tankard's The Oracle (recently also in the Merlyn Theatre) began with a very long multimedia presentation that had me looking sideways at my companion and wondering whether we'd actually come to a dance performance or a video installation. When one is in the honourable position of having the opportunity to see as many shows as reviewers are, it all starts to resemble an extreme kind of over-reaction to the limitless possibilities that multimedia offers. At worst, it's a dangerous statement about the limits of purely choreographic adventure. At best, it's an exciting exploration of form. The awkward questions, however, remain: is contemporary dance experiencing some kind of identity crisis? Or are multimedia and contemporary dance inexorably linked in what is, increasingly, a marriage of pure convenience?

I know reviewers are not meant to speculate on what 'might have been', but the nagging doubt about how much more involving the experience of Mortal Engine might have been in a found space, as opposed to a theatre, continue. The chief doubt (among the many) I have about this work, is that it steadfastly defies (and denies) both genre and theatrical (as in four-walled) conventions; including its dispensing with everything but the fundamentals of a narrative. Creative artists dispense with story at their peril; risking, instead, the reduction of, and requisite alienation from, the extent to which we engage with, and share in, the rewards of the performance. While there are certainly some memorable highpoints in Mortal Engine, including some sensational elevations (from not only the dancers, but also the set), and a furiously breath-taking male solo across the screen's entire surface, it ends up being a purely, if hypnotic, observational experience.

We spend a great deal of time, too, wondering and marvelling at how on earth it's all happening. But at some point, however, the dominant curiosity becomes – and remains – "Why?", not "How?". Or maybe it's as simple as "Why not?" You decide … because perhaps to Mortal Engine's unending credit, I can't. And that has been its greatest gift.