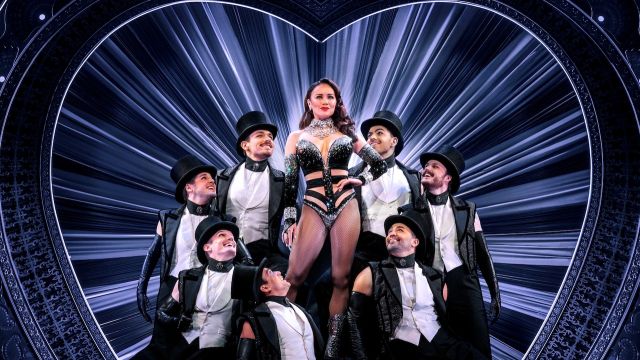 Truth, beauty, freedom and love are the mantras of the characters in the original film and each of these elements is echoed in the stage version. The show is incredibly truthful in its adaptation of the spirit of film by replicating and enhancing its colour and vibrancy. The transition to the stage is truly remarkable and demonstrates an enormous commitment to the beauty that runs through the story and its setting. The staging is nothing short of breathtaking. The meticulous attention to detail in costume and set design is characterised by rich tapestry of detail in the presentation of patterns, colour, and texture all of which produces a sumptuously and deliciously overwhelming mise-en-scene. Much like the approach to the film, the interpretation and evocation of the Belle Époque is laced with inventiveness and contemporary perspectives. The intricate detail in the fabric creates a richness that invites scrutiny, and the various layers and dimensions of the set effectively suggests depth and grandeur of space. The staging and lighting effects are striking and frequently surprising which adds to the overall delight they create. While the vertiginous editing of the film is impossible to reproduce on stage, the spectacular nature of the set design is almost equally dizzying. Freedom is also important to this production as there are notable variations to the original film. The musical pastiche that characterised the screen version has been updated to accommodate new tracks and new ways to blend a variety of extremely familiar pop tunes. The veritable kaleidoscope of pop songs incorporated into the show is a musical feat in itself. Nonetheless, the signature song Lady Marmalade by Crewe and Nolan is made a feature of the stage show and produces some of its most memorable moments. The vocal strength of the performers brings all the songs to life and makes them immediately identifiable, regardless of their brevity or the way they merge into new or different tunes. The characterisations in this production also shifts some attention and nuance onto the central characters. Satine (Alinta Chidzey) is more determined and assertive while The Duke (Andrew Cook) is less snivelling and has more charisma. This kind of creative freedom allows the stage adaptation to breathe new life into the story and to develop a sense of having its own persona. Love and its dazzling effect permeate the stage version and is made even more palpable for the audience. Christian (Des Flanagan) remains wholly consumed by his love of Satine and the world she represents, while Harold Zidler (Simon Burke) is equally smitten by its romance. The intensely omnipresent motif of the love heart is powerfully reiterated without a sense of it being merely a sugar-coated emotion. Love in this production is truly intoxicating and this is reinforced in all the elements including the sensuality of the choreography and the passionate performance of the songs. The show is paced in a manner which allows you to absorb its richness and enjoy its playfulness and it is also prepared to punctuate the glamour with more sombre moments. This production has so many strengths on so many different fronts that it seems acutely aware of the challenge it faced to produce something as visually stunning and alluring as Luhrmann’s vision. The stage experience indisputably meets and exceeds this challenge and gives a persuasive impression that this was its ultimate destination.