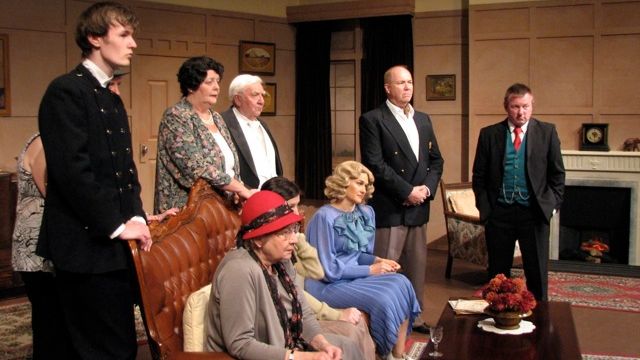 It’s always a pleasure to drive out to The Basin to visit this theatre group because they make patrons feel so welcome. Having said that, the script has a very slow set-up and that wasn’t helped by one member of the cast drying completely and an awkward silence on stage on the second night. However, by the second scene the laughs were coming thick and fast and the audience clearly enjoyed the evening and the spoonerisms of Inspector Pratt…who really was one!

Director Don Harrod has clearly worked hard with his cast, but the show really does need more pace and more movement to put it in the same league as Bob Bramble’s delightful direction of Out Of Order last year. Static comedy, with tableaux at the beginning of each scene, does slow the momentum down and some of the laughs, let alone the plot, are lost because of it. More pace and faster picking up of cues would help enormously. There was a wide range of enjoyable performances but special mention must go to Chris Shaw, whose bumbling idiot Inspector was a nice change from the usual Clouseau interpretation. He was endearing as well as genuinely funny. James Macrae as Bunting was as terrific as I expected and Rowan Thompson made a veritable feast of constable Thomkins. I loved Gregor McGibbon's reveal as a Scottish Pierre, and Susan Carty made Margaret Craddock a formidable wife to Neil McColl’s delicious Colonel Craddock. The set and the costumes for this production are outstanding and potential award winners and all praise to Bob Dingley and Judy Dingley respectively. They have excelled themselves in these areas….and it seems Bob was also responsible for the terrific background music tracks.

All in all a good start to the 2013 season and next…for a change of pace….The Woman in Black. Make sure you subscribe to the whole season. It’s always good value.