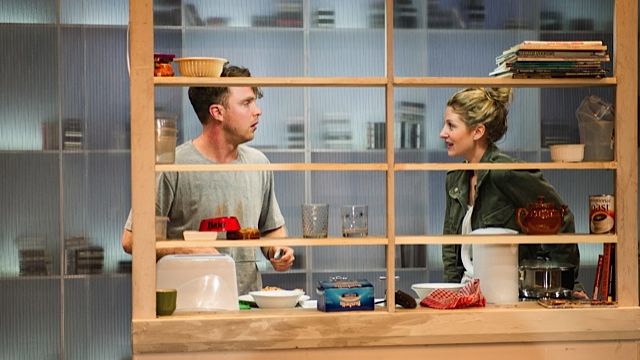 There are lots of great tracks played during Music, Jane Bodie’s powerfully claustrophobic play, but the most disturbing music is playing in the unknowable mind of her mentally ill protagonist, Adam. It’s a devastating portrait of confusion, pain and lost identity. Though there are lighter moments, audiences at the tiny Stables Theatre must prepare for some tough, extra-close-up drama. I ducked for cover several times.

Bodie is former Head of Playwriting at NIDA (2010-2012). Her technical excellence is here allied to a painful, personal knowledge of just such a devastating illness which she approaches with delicacy and respect.

Adam (Anthony Gee) lives alone in a cramped, messy flat (marvellously conjured on the smallest of acting areas by ace designer Pip Runciman). Grubby, barely coping, he plays his music, cooks himself unappetising frozen meals and stacks piles of unheeded correspondence around the floor. Into this locked-off world barge two young actors, Gavin and Sarah (Tom Stokes and Kate Skinner), who are ‘researching’ a play about mental illness.

At first flattered and intrigued, Adam is utterly ill-equipped to deal with these ‘arty’ strangers, whose own stability is soon brought into question. The inevitable climax, though teetering on the edge of melodrama, is gripping and sad, marvellously sustained by a committed cast under the taut direction of Corey McMahon.

Gee is terrific as the hapless Adam. Just as the visiting actors try (and signally fail) to understand him, so Gee attempts to act ‘normal’ with adopted facial expressions and exaggerated body movements. It’s a shocking yet tender portrayal of great sadness.