The Musical of Musicals by Eric Rockwell and Joanne Bogart 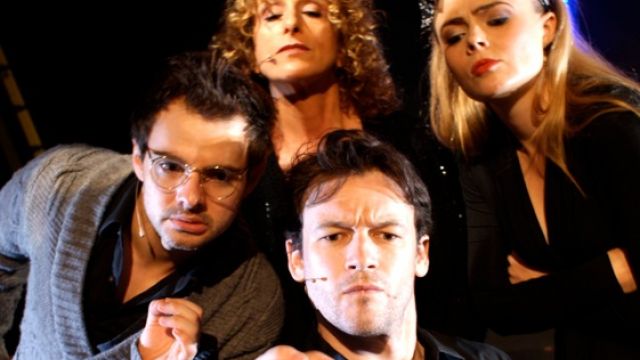 Love musicals? I do. And I reveled in this lively send-up of their special charms, idiosyncrasies, formulaic elements and well-loved clichés, from the Golden Age to the contemporary.

A simple plot is re-told in five send-up mini-musicals, in the style of musical theatre giants Rodgers and Hammerstein, Stephen Sondheim, Jerry Herman, Andrew Lloyd Webber and Kander and Ebb.

The Musical of Musicals is a real hoot for musical theatre insiders, with a steady flow of musical and lyric quotes and misquotes, landing as wicked gags, variations or outrageous puns. Most of the show, though, will work for anyone who has seen their share of Rodgers and Hammerstein, Lloyd Webber and Kander and Ebb.

For show queens or aficionados there are layers within layers – with Kander and Ebb, Chicago or Cabaret is enough knowledge, but their Kiss of the Spiderwoman musical is just one source of extra in-gags. Affectionate Sondheim roast, A Little Complex, set at ‘The Woods’ apartment building, has countless delights, down to the villainous landlord’s doorbell, though I suspect it might be a touch obscure for general audiences. The Lloyd Webber mini-musical is both accessible and penetrating.

Performed on a bare stage, in basic black costumes with simple, clever props and accessories, a few chairs and a suitably minimalised staircase, everything is thrown back on the talent, versatility and broad musical theatre vocabulary of the four terrific performers: Avigail Herman, Andrew Bevis, Belinda Wollaston and Warwick Allsopp.

They come up trumps, pushing the fun to its over-the-top limit, and nailing the appropriate style for each mini-musical. Though most of are singers rather than dancers, their ‘faking’ feels spot on.

The simple production values are effectively complemented by apt lighting, together with sound design that joins in on the jokes, from out of control vibrato to reverberating Lloyd Webber echoes.

Done, a direct A Chorus Line misquote, is a delicious finale to a fun evening of mostly affectionate send-up.

Photo: The cast of Musical of Musicals (c) Jane Miskovic