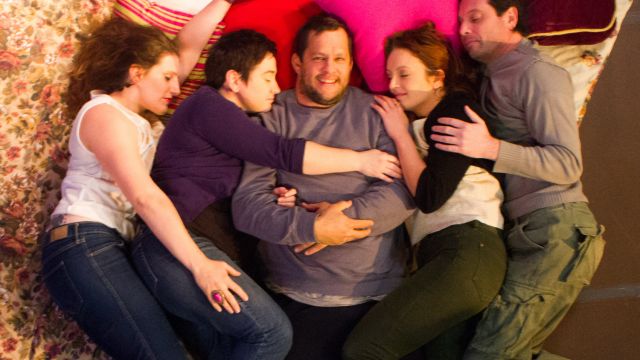 Director Helen Ellis does a sterling job with an excellent cast on Ken Davenport’s compilation play My First Time – an offering about losing one’s virginity.

Plays constructed from real life conversations are not new, and some of them have become classics.

The Laramie Project and The Vagina Monologues, along with The Exonerated, are at the upper echelon of this kind of amalgam. My First Time drifts somewhere down at the bottom of the scale.

The stories are taken from a website of the same name. Unfortunately, the website has attracted precisely the kind of visitor one would expect with that title, and the stories are largely American (and so are the statistics which are flashed on screen) and most include a degree of drunken-ness and/or distasteful attitude to sex. Some seem to have been taken directly from an erotic stories site, yet devoid of any eroticism – and others  - in light of disclosures this past week, seem to have come straight from Donald Trump’s journal. There is one moving story of rape but, instead of it being told by the victim, it is told third hand by the would be boyfriend of the victim, thus diluting any strong emotional response.

The quality of the writing is poor – and there’s little chance to connect emotionally with any of the characters. Nevertheless, the production manages to infuse the script with energy and versatility and elevate the play beyond its limited ambitions. The strong ensemble of Brett Hyland, Melanie Rowe, Clare Hayes, Elise D’Amico and Paris Romanis get the most from the material and manage to find laughs even where none are evident, and that’s to their great credit. However, with probably more than fifty stories split between the five of them, there’s no time to identify with any of the characters or feel any genuine empathy. Hyland and Rowe are particularly good at creating individual characters and switching at a moments notice and Ellis keeps the production moving and colourful when it could easily have become static.

This is perfect entertainment for a hen’s night, or perhaps a Fringe offering or cabaret, with the audience made more receptive through a few drinks, but it didn’t sit well with the 1812 opening night audience - most of them over 70. It seemed to me the wrong play for that venue, even in the intimate Bakery.

A nice little production twist is to have the audience fill in a questionnaire about their own First Time, which are then read out during the performance. However, the old audience apparently wasn’t very co-operative, since I recognised mostly my own answers being read out. The design by Helen Ellis works well (I covet that Kitsch Bamboo bar) and Terry Dean is to be congratulated on sound and lighting. Once again 1812’s excellent supper topped off the proceedings, but it’s a pity such talent and energy were spent on such average material.