My Name is Rachel Corrie 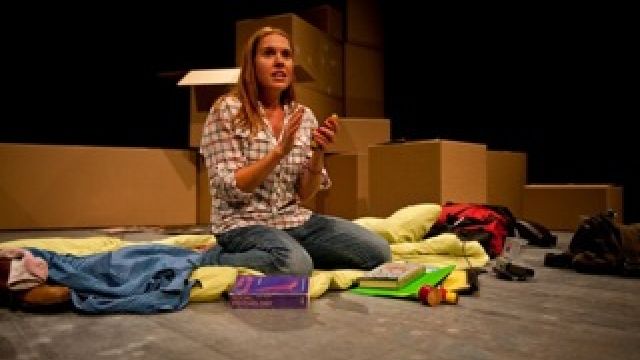 Edited by Katherine Viner and Alan Rickman from the writings of Rachel Corrie. fortyfivedownstairs (Vic) Nov 3 to 14.

My Name is Rachel Corrieis a play based on the diaries and e-mails of Rachel Corrie, a young woman with a passion for the Palestinian cause in the Gaza Strip, that led to her violent death whilst protesting. To create the play Katherine Viner and Alan Rickman edited Rachel’s writing, which in places contains sharp enigmatic poetic imagery and sensitive insights.  It was first produced at the Royal Court Theatre in London in 2005.

This current production, from the 2009 Adelaide Fringe, is a beautifully and tastefully produced, sincere and surprising one-woman performance. Hannah Norris gets into the skin of the character of Rachel Corrie to express something of the essence of this energetic, lively and highly politically charged activist.

The work starts very simply by elucidating Corrie’s character as she talks about herself to a camera, which in turn is projected as a large close-up of her face setting up a voyeuristic and intimate relationship with the viewer. Right away it is obvious that Ms Norris’s skill and commitment will be adequate for the ninety-minute journey. Initially, light and space appear to be under utilised. However, once Corrie is telling us about and reliving time in the Gaza Strip, stagecraft is appropriately employed to support the actor and the narrative. This is done with real finesse under Daniel Clarke’s unifying direction.

The design by Cassandra Backler delights with its use of cardboard boxes and Ben Flett’s lighting and sound along with Annemarie Kohn’s projected images reinforce and enhance with impeccable timing.

Not one for political theatre, I was pleasantly surprised, to feel I was not being drawn into responding in a prescribed way. This is not agitprop theatre, but, rather, a performance that presents an individual, youthful and therefore possibly naive perspective in a clean way that allows ‘space’ for interpretation.