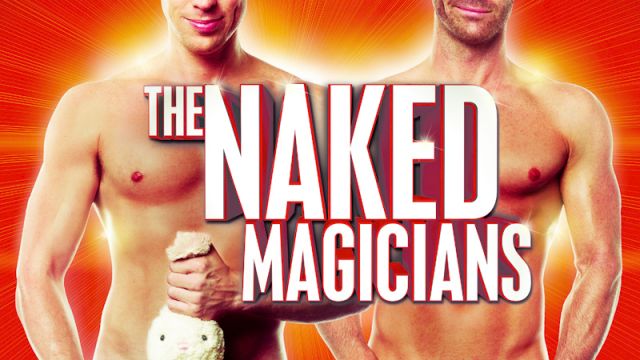 There is an old saying in theatre that says ‘less is more’. That is certainly the case with The Naked Magicians -less clothes and even more talent.

I didn’t really know what to expect, apart from the obvious magic and nudity, so I wasn’t quite prepared for what awaited me. On arriving, the audience is immersed in the experience, music blaring at full volume with bright blue and pink lights illuminating a stage, a hanging box, a table and a chair with an inflatable naked lady sitting astride.

You can feel the anticipation from an audience filled with girls in the early 20s, women in their 40s, boyfriends who had been dragged along and groups of men in their 40s and 50s; an eclectic mix.

Christopher Wayne and Mike Tyler, The Naked Magicians, appear in white and red dinner jackets and assure us we will see some flesh but have to earn it first by helping them with their magic.

Now, I am the nephew of a magician so I had high expectations from the magic and these guys can certainly deliver. It is slick, effortlessly handled and had me puzzled a few times.

Audience participation plays a large part in making this show work so well. The initial participants are chosen by the audience as they keep a large inflatable penis in the air until the music stops and the unfortunate audience members left holding it (in various positions) become the first volunteers.

As a magician’s nephew I won’t give away the content of the magic; let’s just say that there are card tricks, mind reading, sleight of hand, the classic rope trick and a strait jacket escape, which determines which performer will strip off first and perform the next trick with just a hat held in place (I’m sure you can guess where) by an audience member.

The mind reading trick is a crowd pleaser, with an audience member responding to questions based on a word that person has chosen. There’s a twist.

Apart from the magical tricks performed by the two skilled performers the other magic is their banter. This show depends on audience reaction and participation, together with the magicians’ handling of it.

The narration and ad libs flow freely and effortlessly, varying from suggestive to blue, but never going too far.

The performers really know how to work an audience and even when things go wrong, which they did on the night I attended, they have the skill to turn disaster to advantage.

All in all, a wonderful show, hysterically funny and with the right amount of titillation.

The ending (which I will not reveal) must be seen to be believed and will keep you coming back in every sense of the word.