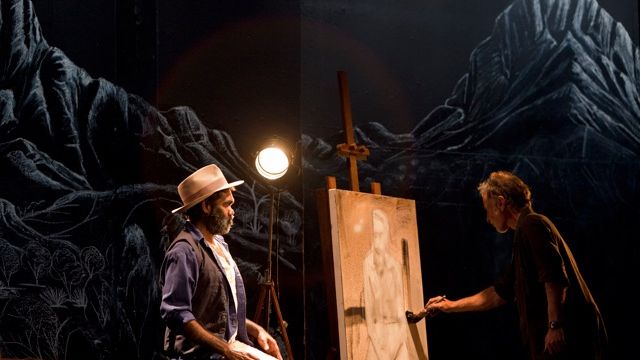 It tells the rich, complex, mostly unknown story, joyous at times, sad and tragic at others, of indigenous watercolourist Albert Namatjira, told with the co-operation and support of his Aranda people.

Trevor Jameison is a consummate, charismatic actor and story-teller. He weaves his way easily between the roles of Namatjira, and other characters including his friend / mentor (and vice versa), fellow artist Rex Batterbee. Single-handed Jameison conveys that remarkable relationship, bridging Australia’s cultural divide with extraordinarily, muilti-layered power.

Jameison, and writer Scott Rankin, ease the audience gently into the story breaking the fourth wall with warm, engaging stand-up wit at the outset.

Talented Derek Lynch supports Jameison, capturing numerous cameos, joyously outrageous in drag as Queen Elizabeth, an A List art lover and Albert’s wife, while pairing with him at other times in soul-searching harmonies.

The design (by Genevieve Dugard), a panorama and more, wraps around the audience, white chalk against a black background depicting the outback landscape. A magnificent, versatile, polished carved timber centerpiece, adds a stunning three-dimensional representation of the landscape and acting space. Nigel Leving’s lighting is evocative and atmospheric.

A further extraordinary dimension is added as Namatjira’s grandson Kevin Namatjira quietly and inobtrusvely adds to the chalk landscape during the performance.

Until now Albert Namatjira’s story has been scantly told; especially with regard to the toll extracted from this gentle man both white Australia (which idolized then rejected him), and his own indigenous community (he supported hundreds in his extended family and community).

In the meantime, this play has taken us on an extraordinary journey, well beyond that familiar image, into the life of Albert Namatjira, and the Australian society in which he lived.